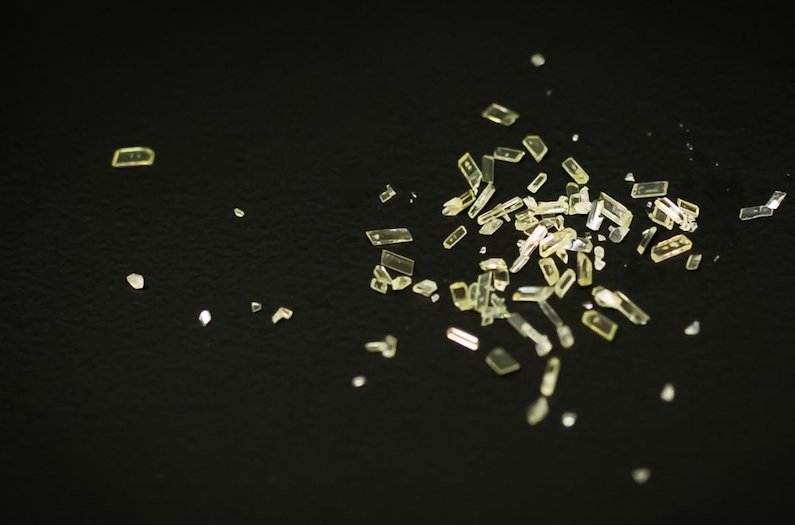 A cheaper way to pull carbon dioxide from the air, turn it into crystals

Researchers have chanced upon a seemingly efficient way to directly capture carbon dioxide from air so it can then be locked away.
By Prachi Patel
January 12, 2017

January 2017 is a big month for carbon capture in the US. The first large-scale clean coal facility became operational, pumping carbon dioxide from a Texas coal power plant to a nearby oilfield to extract oil. Another clean coal plant will become operational in Mississippi at the end of the month.

Capturing carbon dioxide emissions from power plants and industries, while controversial, could play a key role in slowing global warming. But to keep average temperatures from rising more than 2 degrees Celsius, many experts believe we will also need to pull carbon dioxide directly from the air. Researchers at Oak Ridge National Laboratory (ORNL) have found a seemingly cost-effective and simple way to do that.

The technology involves a liquid that sucks carbon dioxide from the air and turns into crystals. The technique can capture and then release carbon dioxide for storage using far less energy and chemicals than traditional methods.

The researchers chanced upon the method. They had been studying ways to remove environmental contaminants from water. So they synthesized a simple compound called guanidine, which is commonly used to make plastics, and which reacts with the contaminants to form crystals in the water.

But when the researchers left an aqueous solution of guanidine exposed to air, they saw that crystals started to form. Chemical analysis of the crystals showed that they contained carbonate, which is formed when carbon dioxide from air reacts with water. The results are published in Angewandte Chemie International Edition.

Scientists have been working on several other methods to absorb carbon from the air. But to date, no such direct air capture technology has been proven cost-effective on a large scale.

For now, the ORNL team is trying to analyze the guanidine material’s crystalline structure to understand how its carbon capture mechanism works so that they can design more efficient materials.