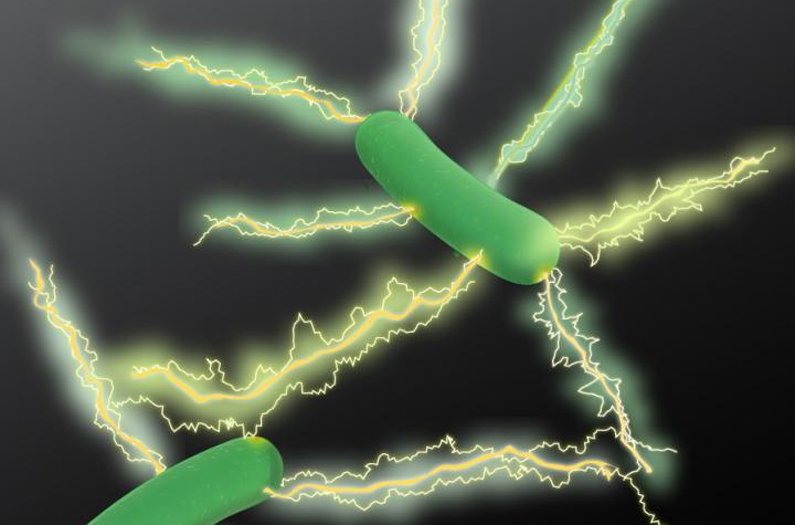 From the swamps of the Potomac, new hope for green electronics

Protein filaments called "nanowires" that are produced by certain species of bacteria could be a key to environmentally friendly electronics manufacturing.
By Sarah DeWeerdt
January 24, 2017

Protein filaments just 3 nanometers wide that are produced by certain species of bacteria could be a key to environmentally friendly electronics manufacturing, according to microbiologists at the University of Massachusetts at Amherst.

Scientists discovered the filaments, dubbed “nanowires,” about 5 years ago. Bacteria use them to make electrical connections with other bacterial cells or to generate reactions with metals in the environment.

The new study, supported by the US Office of Naval Research, is part of a larger effort to investigate the electrical conducting ability of nanowires from different species of bacteria. For example, Geobacter sulfurreducens produces nanowires that are moderately conductive. Nanowires from a related species, G. uraniireducens, are about 100 times less efficient at conducting electricity.

Now researchers have tested the conductivity of nanowires from a third Geobacter species, G. metallireducens. “I isolated metallireducens from mud in the Potomac River 30 years ago, and every couple of years it gives us a new surprise,” says study leader Derek Lovley.

More conductivity means more potential applications for nanowires. Filaments like those produced by G. metallireducens are powerful enough that they could theoretically be used in sensors and other electronic devices.

The conductivity of nanowires depends on the specific sequence of amino acids—the building blocks of proteins—of which they are composed, this and other recent research has shown. This knowledge could be used to design synthetic nanowires with even higher conductivity.

Or maybe there is another bacterium out there that makes even more highly conductive nanowires than G. metallireducens.

“We have found that G. sufurreducens will express filament genes from many different types of bacteria,” Lovley says. “There is a vast reservoir of filament genes in the microbial world and now we can study the filaments produced from those genes even if the gene comes from a microbe that has never been cultured.”

Either way, growing nanowires in bacteria promises to be a much greener option than manufacturing similar components by traditional techniques. The nanowires “can be sustainably produced without harsh chemical processes from renewable feedstocks and…contain no toxic components in the final product,” the researchers write.