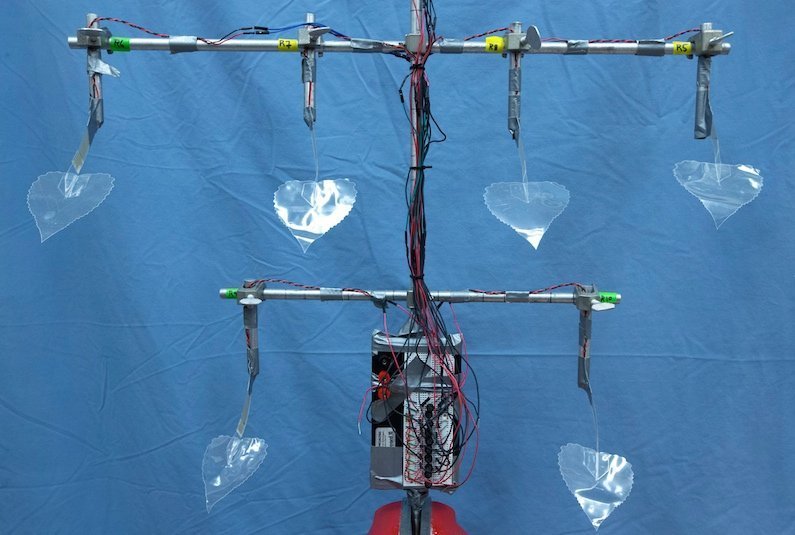 A tree that generates wind power

Iowa State University researchers have made a device that mimics the branches and leaves of a cottonwood tree and generates electricity when its plastic leaves flutter in the wind.
By Prachi Patel
February 16, 2017

Cell phone towers masquerading as trees are a pretty common sight. Iowa State University scientists have now similarly disguised wind turbines. They have made a device that mimics the branches and leaves of a cottonwood tree and generates electricity when its plastic leaves flutter in the wind. Larger, much-improved versions of the electricity-generating plant carrying thousands of leaves—could generate enough electricity for small appliances.

The US Department of Energy has set a target of 20 percent power generation from wind by 2030. But as Michael McCloskey and his colleagues point out in their PLOS ONE paper, large wind turbines are “noisy, perceived as unattractive, a potential hazard to bats and birds, and their height hampers deployment in residential settings.”

Energy-harvesting devices that look like plants might assuage those concerns. The concept is not new. Some researchers have already designed leaf-shaped generators and miniature trees that harness wind and solar energy. In Paris, a French company is installing a wind tree that has tiny spinning blades hidden in its leaves.

McCloskey and his colleagues set out to design an efficient artificial plant could be scaled up to generate tens of watts of wind power. They modeled their generator on the cottonwood tree because of its leaves flutter in an unusually ordered, regular way. In a 10 miles-per-hour wind, a cottonwood tree with 500,000 leaves would dissipate 80 Watts of energy because of the leaves’ motion. “If a faux tree scavenged half this power, it could deliver off-grid energy sufficient to charge batteries of small household appliances,” the researchers write in the paper.

The team made a metal trellis and hung a dozen plastic flaps that are shaped like cottonwood leaves. The leaves are laced with small strips of a special piezoelectric plastic. Piezoelectric materials generate electric power when they bend or move.

Tests of the tree outdoors in natural wind showed that as wind direction and speed changed, the power output ranged from 0.15 to 165 microwatts. That means a synthetic tree with 100,000 leaves that each generated 100 microwatts would produce less than 1 Watt, much too little for practical purposes.

But the Iowa team is confident that an electricity-generating method other than piezoelectricity could solve that issue. They are looking at triboelectricity, the phenomenon in which friction between dissimilar materials generate charge. Researchers have already used triboelectric technology to make electricity-generating textiles that charge lithium batteries, flat devices that harvest wind and solar energy, and a flag that generates enough power when it flaps in the wind to power small electronic devices.