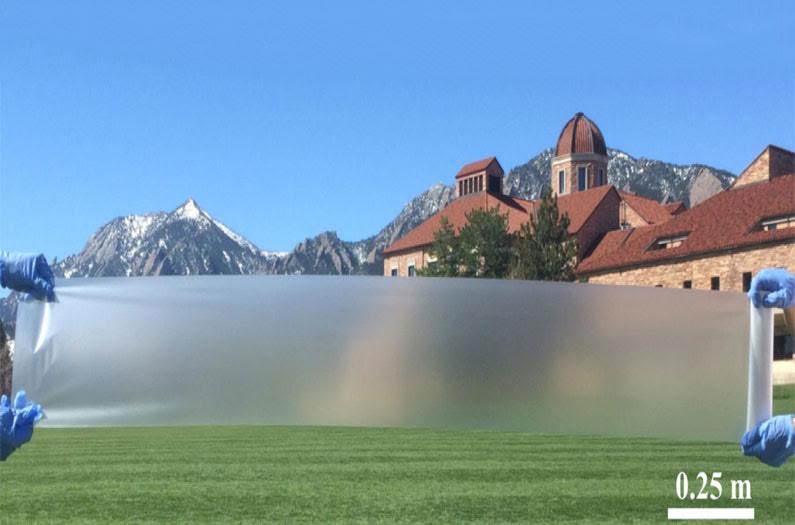 A flexible white film about the thickness of a sheet of aluminum foil can cool objects in direct sunlight without energy or water consumption, researchers reported earlier this month in Science.
By Sarah DeWeerdt
February 21, 2017

A flexible white film about the thickness of a sheet of aluminum foil can cool objects in direct sunlight without energy or water consumption, researchers reported earlier this month in Science.

The material takes advantage of the same principle as the earth’s natural cooling mechanism: passive radiation of infrared wavelengths into the coldness of space.

Previously, researchers have developed materials such as specialized paints that can accomplish radiative cooling at nighttime, but during the day absorption of even a small amount of solar radiation quickly outstrips these materials’ cooling power. There are also a few experimental materials that work during the daytime, but they require precision manufacturing that would be difficult to scale up.

The new material has neither of those limitations. It consists of micrometer-sized glass spheres embedded randomly in a polymer known as polymethylpentene, or TPX.

The researchers chose TPX because it absorbs less sunlight than similar transparent polymers. The glass spheres also absorb minimal solar radiation, so there’s no problem with the material heating up in the sun.

A thin coating of silver nanoparticles on the back of the film reflects sunlight. And the tiny glass spheres emit infrared wavelengths, enabling heat to escape.

“The key advantage of this technology is that it works 24/7 with no electricity or water usage,” says study coauthor Ronggui Yang, professor of mechanical engineering at the University of Colorado in Boulder.

“Just 10 to 20 meters of this material on the rooftop could nicely cool down a single-family house in summer,” says study coauthor Gang Tan, an engineer at the University of Wyoming in Laramie.

The material is lightweight and can conform to curved surfaces. TPX is durable and could likely last a long time outdoors. The researchers envision the film being used for climate control on homes and other buildings; auxiliary cooling for power plants; and to prevent other objects from overheating. Solar panels, for example, lose efficiency and wear out sooner when they get too hot.

One of the biggest advantages of the material, they say, is that it is easy and economical to produce in large quantities. They used a straightforward technology known as roll-to-roll printing to produce a strip of film 30 centimeters wide at a rate of 5 meters per minute.

The next step is to scale up field tests, with a 200-square-meter “cooling farm” planned for later this year.