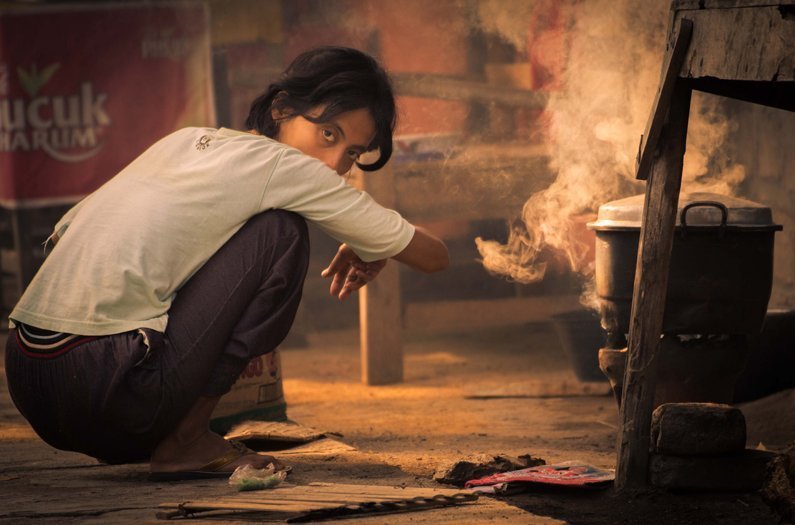 A new study shows that a projected phase-out of polluting cookstoves in 101 countries could have a substantial impact on the global effects of climate change.
By Emma Bryce
February 10, 2017

What is the link between cooking and climate change? Three billion people use traditional cookstoves to make their daily meals, burning fuel on an open flame and inadvertently releasing pollutants into the air—so this has become an increasingly pressing question. But a new study published in Proceedings of the National Academy of Sciences finds that changes to this cooking regime at the country level could substantially undercut the effects of climate change.

In recent years, we’ve become aware of the health impacts of cookstoves: by burning fuels ranging from cow dung to coal and wood, cookstoves both contaminate people’s homes and pollute the outside air, causing ailments like lung cancer and heart disease that kill 4.3 million people prematurely every year. But environmentally-speaking, the impact of their emissions has been harder to pin down.

Cookstoves are known to produce an estimated 2.3 percent of global CO2 emissions. They also expel other impactful greenhouse gases like methane, as well as aerosols, a class of substances that includes black carbon (otherwise known as soot).

Aerosols complicate matters further because their effects can vary: some cause warming, and others have a cooling effect thanks to the particulate matter they contain, which can block sunlight. Because they have a relatively short lifespan in the atmosphere, aerosols’ largest impact is at a more localized country-level—which can lead to regional variability.

The study authors, from the University of Colorado, Boulder, and Dalhousie University in Canada, wanted to take this variability into account so that they could produce a very fine-grained estimate, showing what would happen if countries started phasing out cookstoves. Using a combination of remote sensing and atmospheric modeling, they created cooking emissions profiles for 101 countries where over 5 percent of the population uses cookstoves. Then they modeled the outcome of a hypothetical 20-year cookstove eradication program in each country.

It showed that by 2050, global temperatures would decrease 0.08°C, primarily as the short-term impacts of aerosols are removed. By 2100, that climbs to 0.12°C, as the benefits of eradicating lingering greenhouse gases—like carbon dioxide and methane—start to kick in. It’s a fairly significant decline, especially considering the Paris Agreement’s 2°C warming limit for the globe. Researchers estimate that the decrease would also stop over 10 million premature deaths by 2050.

Most intriguingly, the detailed country-level modeling highlights stark regional differences in cookstove pollution. India and China were found to be the biggest cookstove emitters, and they contributed the most to temperature change. But the size of emissions didn’t always correspond to impact: Azerbaijan and Ukraine, for example, have fewer cookstoves but a large impact on temperature, because regional weather patterns there transport emitted soot over Arctic snow—which counteracts its reflective cooling effect.

These findings highlight key countries where cookstove interventions aren’t currently commonplace—mostly in Eastern Europe and Central Asia—but could in the future have a considerable benefit.

Yet, can we really phase out cookstoves in 20 years? The study authors note that eradication in this timeframe is a tall order, what with so many people dependent on this mode of food preparation.

Nevertheless, with the spread of improvements and replacements for traditional cookstoves—like solar-powered cookers, cleaner-burning fuels, and solar energy—the research does provide a necessary roadmap for where to leverage these technologies, for the greater global good.