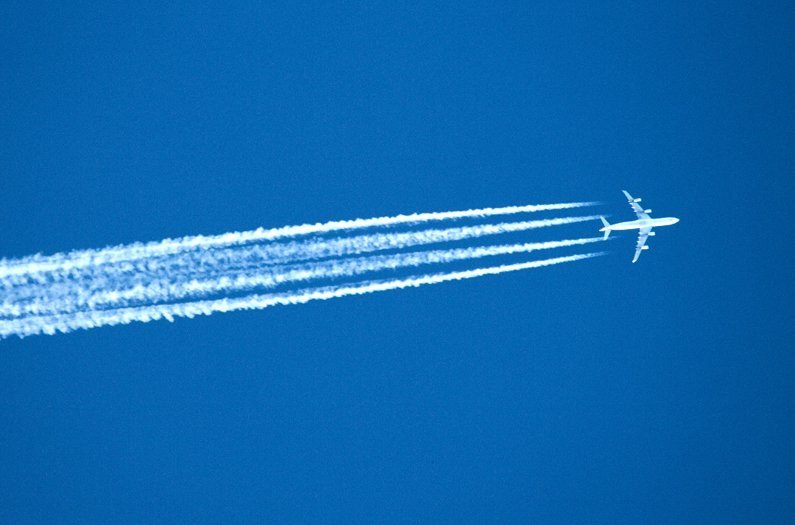 Using biofuels can reduce the emission of tiny aerosol particles from airplanes by up to 70 percent, based on direct measurements from cruising aircraft.
By Prachi Patel
March 16, 2017

Using biofuels can reduce the emission of tiny aerosol particles from airplanes by up to 70 percent, researchers have found. The study, published in Nature, gives the first direct measurements of the number and size of engine exhaust particles from cruising aircraft burning a bio-jetfuel blend. The data will be valuable for evaluating how biofuels will help the aviation industry reduce its climate footprint.

As air travel soars around the world, its environmental impact is set to grow. Globally, aviation is responsible for 2.5 percent of the world’s carbon emissions. Many in the industry are looking to bio-jetfuels as one way to negate those emissions. But carbon emissions from jet engines aren’t the only concern.

Contrails, those white streaks that airplanes leave in the sky, also affect climate. They contain mostly ice particles but also impurities such as sulfates and black carbon as fine aerosol particles. Contrails can induce the formation of clouds, which trap heat and warm the planet.

To better understand the effect of contrail-induced cloudiness, researchers have tried to analyze the aerosol particles emitted per kilogram of fuel burned and the properties of those aerosols that can form clouds.

So far, emissions tests on jet engines burning biofuel have been done on the ground. Because biofuels have near-zero sulfur and carbon compounds compared to petroleum-based jet fuel, ground tests show that exhaust contains less sulfate and black carbon particles.

But conditions on the ground are different from those in-flight. So a team of researchers led by Richard Moore at NASA’s Langley Research Center performed midair measurements. They had an instrumentation-laden research aircraft trail a NASA DC-8 engine airplane. The DC-8 burned either conventional Jet-A fuel or a 50:50 combination of Jet-A and biofuel.

The research aircraft flew 30–150 meters behind the DC-8 aircraft to sample the exhaust plumes from the left and right engines. The measurements were done at three different engine thrust levels.

Compared to conventional jet fuel, the biofuel blend produced 50–70 percent fewer particles during cruise conditions. The particles were also smaller. The emissions reduction is more pronounced when the test aircraft flew at low and medium thrust settings. The researchers also detail the size distribution of the emitted aerosol particles in their paper.

The researchers caution that the higher hydrogen content of the biofuel blend compared to conventional jet fuel could, however, increase ice crystal mass in the contrails. Future studies should explore this, they say.