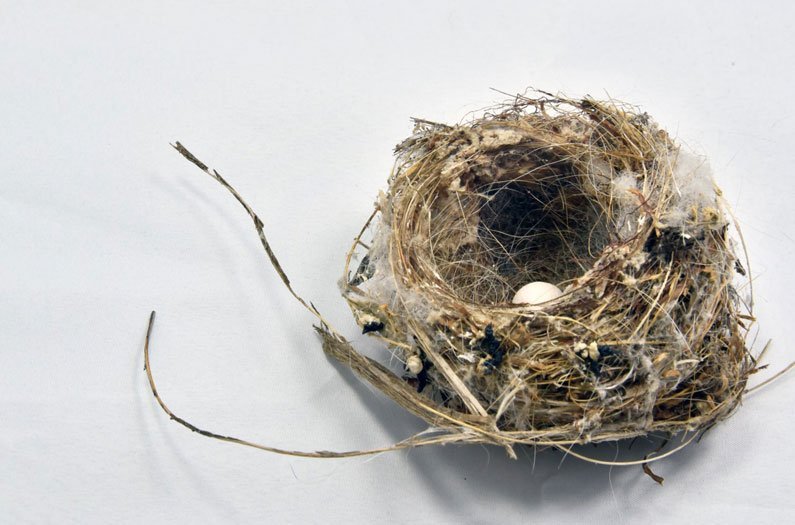 The fine craft of nest construction isn’t unique to humans

For much of the temperate world it’s almost spring, and songbirds will start building nests—an activity that's the subject of a scientific debate that could transform how we understand these marvelous structures and their makers.
By Brandon Keim
March 8, 2017

For much of the temperate world it’s almost spring. Trees will bud, ephemerals bloom, and songbirds start building nests—an activity that’s now the subject of a scientific debate that could transform how we understand these marvelous structures and their makers.

Nest-building was once considered purely instinctive. And it’s true that, at least for some species, birds raised in captivity without ever seeing nests will still build them. Intricate as they are, then, nests might be viewed as mindless. Yet that idea has been challenged. Researchers have found that birds may become better builders with age. Instinct is certainly involved, but it’s accompanied by learning and evidently conscious deliberation: birds choose materials with specific properties and assemble them in precise order. In that light, nests are not just rote rehearsals of genetically programmed behaviors, but the work of feathered craftspeople.

The latest contribution to the debate comes from biologists Lucia Biddle, Adrian Goodman, and Charles Deeming of the University of Lincoln in the United Kingdom. In a study published in the journal PeerJ, they analyzed the structural characteristics of nests made by bullfinches—a songbird native to Eurasia, but broadly representative of other songbirds who also build open-cup nests.

“Some of the behaviours underlying the construction of nests can be indirectly determined by careful deconstruction of the structure,” wrote Deeming’s team. With painstaking care they disassembled 13 bullfinch nests, measuring and weighing and testing the stiffness of every last twig and blade of grass. A blueprint of considerable complexity emerged.

The nests were composed of two distinct structures: a small, soft cup woven from fine roots and grass stems, surrounded by a large, rigid cup made from twigs and the stems of flowering plants. The inner cup likely functions as insulation; the outer cup provides form and stability. It’s a work of some engineering, with longer, thicker, and multi-branched elements on the bottom supporting side walls woven from short, slender pieces.

“For the first time we are able to demonstrate that there were significant differences in the structural properties of the various materials used to construct a Bullfinch nest,” wrote the researchers. “The positioning of the various materials into different parts of the nest appears to be non-random.” As to the cognition involved in doing so, Deeming and colleagues pointedly “make no claim but rather point out that use of different materials in various parts of the nest potentially indicates a change in behaviour as each part is constructed.”

It might still be explained by instinctive mechanisms alone, albeit even more complicated than previously thought. Or there might be a thoughtfulness involved as a bullfinch moves through each stage of construction—a thoughtfulness in keeping with what we’re learning of a class of creatures who pack a great deal of cognition into their tiny brains.

For all their ubiquity, “our understanding of nest construction behaviour in birds is very poor,” write Deeming’s team. However the debate is finally settled, we might for now just appreciate how wonderful nests are.