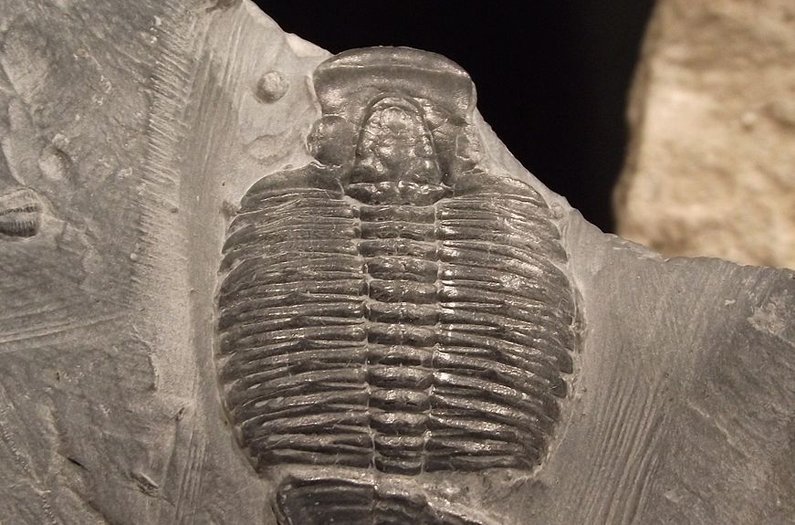 Trilobite fossils have already been suffused by humans' chemical legacy. New research suggests they may reveal more about modern terrestrial ecosystems than they do about early Paleozoic oceans.
By Brandon Keim
April 19, 2017

Many phenomena signify the Anthropocene, our age of ubiquitous human impact: urbanization, tropical deforestation, biodiversity loss, the topography of Earth’s radically altered surface. Add to that list, perhaps, the very composition of fossils deposited hundreds of millions of years ago, yet already suffused by our chemical legacy.

In a study published in the journal Anthropocene, geologists led by Douglas John and Sally Walker of the University of Georgia tested the chemistry of fossil trilobites collected from Utah’s Wheeler Shale deposits, which 500 million years ago were the floor of a vast shallow sea. Trilobites entombed in the seabed were preserved with spectacular fidelity, appearing lifelike even today—but the composition of the fossils themselves is distinctly modern.

“The fossils revealed more about modern terrestrial ecosystems and anthropogenic influence than they did about early Paleozoic oceans,” write John and Walker’s team. “Plasticizers, flame retardants, petroleum byproducts, and insect repellent comprised up to 96 percent of all compounds present in the trilobite exoskeletons.”

That 96 percent figure represents an extreme among the eight fossils they tested. Others of the fossils had human-derived content averaging between 40 and 70 percent, though even those numbers are a surprising—and sobering—testimony to the pervasiveness of long-lived industrial compounds carried by air and water, eventually leaching into the shale deposits and adhering to the trilobites’ sponge-like limestone exoskeletons.

The findings have practical implications. As more fossils are collected and tested, they could tell us about patterns and routes of pollution. Walker is especially curious about the processes by which anthropogenic compounds penetrate Earth’s surface. For scientists who use fossil chemistry to study ancient ecosystems, the findings underscore the importance of testing for modern confounders. And they show that being careful is no guarantee of purity. Even scrupulously-handled trilobites were contaminated.

Beyond the practical, there’s a poetic resonance, too: humanity’s chemistry in seemingly pristine, half-billion-year-old fossils belonging to a group of creatures who lived for 270 million years are now gone. Survival is a precarious thing. “Plastics, pesticides, and other petroleum byproducts are the worst. They affect our endocrine and reproductive systems,” says Walker.  “Speaking for myself, I am sure that my entire body is outlined by plastic from all the plasticized paper I’ve touched and all the water I’ve imbibed. We have to return to a sustainable way to work with the Earth. Otherwise our greed will do us in.”