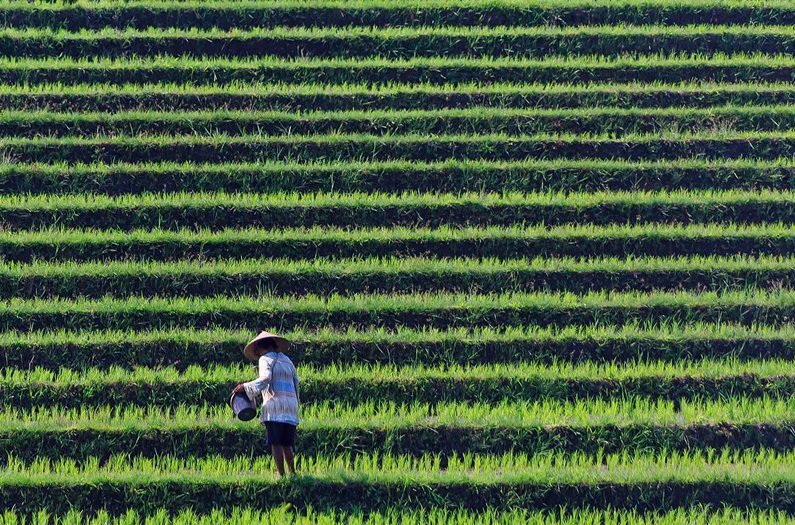 An unfortunate trade-off of drought-resistant crops is that they tend to be less productive. But now researchers have made productive rice strains that are also tougher, in preparation for a hotter future.
By Emma Bryce
April 7, 2017

Rice is the second-largest crop on the planet and a staple for more than half the people on Earth. That abundance is threatened by the specter of rising drought, which places rice yields under pressure globally. But now a group of international scientists has discovered that by tweaking rice’s genes, they’re able to produce tougher varieties, which will have a better shot at dealing with drought.

Part of the urgency behind the quest for more resilient rice plants is that global demand for this crop is also growing: by 2035, it’s estimated that we’ll have to increase rice production by a quarter to keep feeding Earth’s expanding, rice-hungry population.

An unfortunate trade-off of naturally drought-resistant varieties is that they’re usually less productive. The researchers, who hail from institutions in Colombia and Japan, think a solution to that problem may lie in a specific gene that produces enzymes to help plants survive drought. In their study, published in Plant Biotechnology Journal, they explain that the gene in question—called AtGoIS2—controls the production of a particular enzyme in plants, called Galactinol synthase. This enzyme’s role is to produce osmoprotectants, substances that in high-stress conditions will stop water evaporating out of a plant’s cells. That allows the plant to retain moisture during droughts.

Using rice species from Africa and South America—two rice-growing regions expected to suffer from increased drought in coming decades—the scientists bred several different varieties which all contained an overexpressing version of the AtGoIS2 gene. That allowed the plants to boost their natural production of the osmoprotectant, making them lose less water when conditions were dry. But that alone couldn’t prove how well the enhanced rice would deal with real-world conditions.

To find out, the researchers set up growing stations in Colombia with ‘rainout’ shelters, structures that allow the experimental control of moisture, so scientists could closely mimic actual drought conditions. Over the course of several field trials, they found that during the seedling and the breeding stage of the rice’s lifecycle, the genetically enhanced strains were more robust, more fertile, and had higher yields than their unmodified rice counterparts under these dry conditions.

Then, taking it a step further, the researchers decided to test out the new rice strains over the course of an ambitious three-year trial, under completely natural weather conditions in Colombia.

During that time, the plants experienced both mild and intense drought. But again, they proved themselves hardier and more productive—highlighting their real-world potential as drought-resilient rices that continue to produce as much grain.

This isn’t the only climate-resilient rice on the market: scientists have bred other varieties—some already in farmers’ fields—which are variably tolerant to flooding, cold weather, and high soil salinity. It will be some years before this most recent version reaches farmers. But the researchers expect it to have “significant economic and environmental benefits in low-input agricultural systems like Latin America and Africa,” when it does.

As climate change metes out its impact on those landscapes and others around the world, an army of hardy plants will be part of the solution to keeping food insecurity at bay.