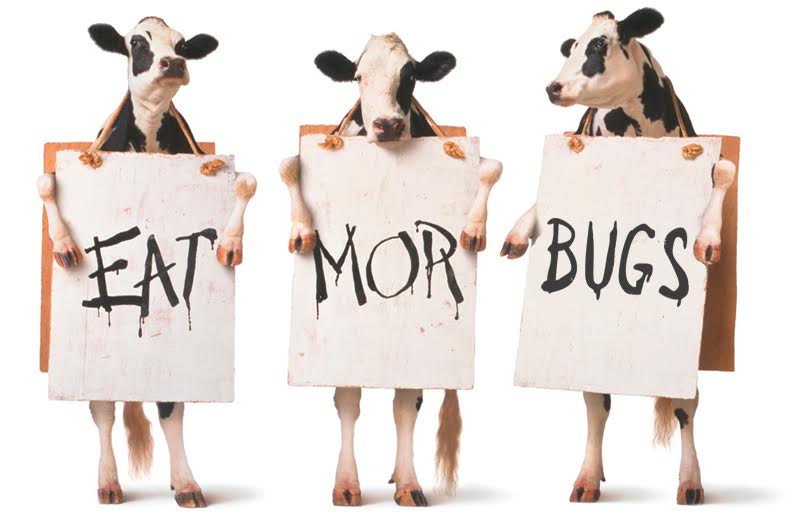 Boosting our consumption of insects and soy products would save vast areas of land from conversion to livestock pasture. And surprisingly, consuming more chicken, milk, and eggs in place of beef would result in similar land savings.
By Emma Bryce
May 12, 2017

Edible insects, soy protein, and lab-grown meat: these are increasingly touted as sustainable alternatives to a typical meat-centric diet. But if we started to consume more of these products in place of regular meat, would it really benefit the environment?

In the first study to explore this question in detail, researchers have found that boosting our consumption of insects and soy products would indeed save vast areas of land from conversion to livestock pasture. But interestingly, they also discovered that our dietary shifts needn’t necessarily be so extreme: consuming more protein-rich foods like chicken, milk, and eggs in place of beef would result in similar agricultural land savings.

Globally, livestock pastures take up more than double the land that crops do. Livestock also consume a third of the crops grown globally as feed—accounting for even more land use—and contribute 12 percent of global greenhouse gas emissions.

Writing in Global Food Security, the researchers, led by a group at the University of Edinburgh, wanted to explore how four alternatives to a meat-heavy diet—insects (ground down to make high-protein flour, for instance), imitation meat (such as soy burgers), cultured meat (produced from scratch using animal cells in a laboratory), and aquaculture—might help to change this scenario.

In each case, they used a metric called the Human Appropriation of Land for Food index, which takes into account existing data on global food consumption and its land footprint. For each alternative food type, they estimated what the impact would be if the food replaced 50 percent of our current meat consumption.

The alternatives varied in their impacts: for instance, despite the hype around lab-grown meat, the researchers found that the huge energy costs associated with producing this food are high enough that they diminish its environmental benefits.

Imitation meat and insect protein, by comparison, were by far the most efficient in terms of land use. This was true for insects, especially: creatures such as crickets and mealworms are small, reproduce quickly, and contain high levels of edible protein, meaning they’re efficient to farm. The researchers calculated that a diet that replaced 50 percent of normal meat consumption with these products would save 1,680 million hectares from conversion—a land area almost twice the size of the United States.

Because of the current social and cultural hang-ups about consuming insects in particular, the benefits of these dietary shifts are unlikely to play out as cleanly as they did in the study—and the researchers acknowledge that they’re presenting an ideal scenario.

But in their dietary comparison they also discovered, surprisingly, that poultry products and milk weren’t far behind insects and soy in terms of land-use efficiency: a diet heavier in these foods would in fact save 1,470 million hectares, or about 30 percent of agricultural land. So, switching a beef-heavy diet for one that incorporates more of these foods would have similar benefits to eating more insect and soy protein.

Ultimately, this survey of alternative foods gives a glimpse into what’s possible in an ideal future scenario. In the meantime, the researchers say, small changes that collectively lessen our dependence on beef will help to reduce the current pressures on agricultural land.

“A mix of small changes in consumer behaviour, such as replacing beef with chicken, reducing food waste and potentially introducing insects more commonly into diets, would help achieve land savings and a more sustainable food system,” they conclude.