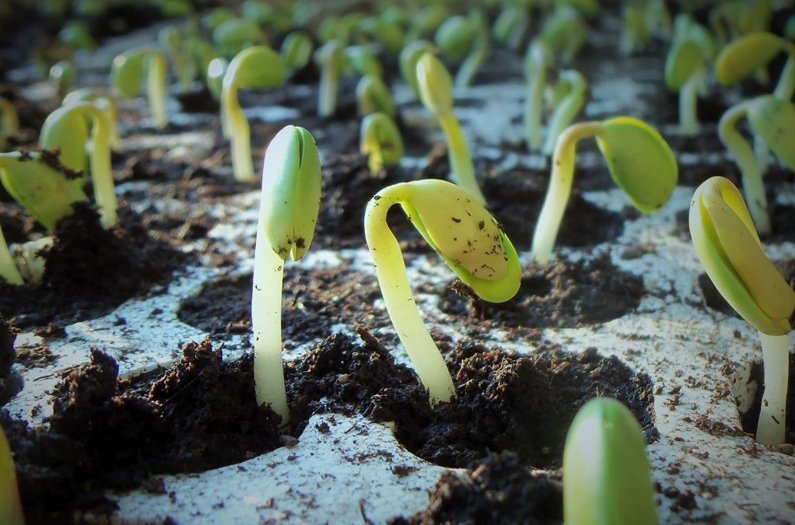 Tweaking soybean genes could help us build plants that are able to weather both rising temperatures and carbon dioxide levels. And these changes might also limit soy's expansion into forests and other habitat.
By Emma Bryce
May 26, 2017

What will it take to build crops that can withstand future climate changes? A group of plant biologists think they might be on to a solution for soybeans. Using genetic engineering, they’ve created a plant whose yields remain unaffected by high-stress conditions. The key lies in a genetic tweak that makes the plant overexpress a particular enzyme, which is thought to boost the efficiency of their photosynthesis cycle and enhance seed production.

Soybeans are the world’s most widely-farmed legume. But like several other staple crops—including rice and wheat—their optimum growing conditions are threatened by the uncertain effects of predicted temperature and CO2 increases in the coming decades. It follows that if there is reduced productivity and rising food need globally, crops might have to colonize more land in order to keep up. That, in turn, will threaten forests and other habitat. Already, this is a big problem for soy.

The researchers, from the University of Illinois at Urbana-Champaign, were interested in finding out whether soybeans could potentially circumvent this problem by maintaining their yields even under harsh conditions. Writing in the Journal of Experimental Plant Botany, they experimented on two types of soybean plants: one was a regular breed, and another had been modified to overexpress the FBP/SBPase enzyme, which is associated with the photosynthesis cycle. Previous research has shown that when overexpressed, this enzyme boosts production in other plants like tobacco. That might be because it enables plants to allocate more of the carbon they absorb towards seed growth. But results have varied across different species.

To test the effects of elevated temperature and CO2 on the engineered plants, the researchers planted several study plots with both regular and modified soy plants. By splitting those into sub-plots, they were then able to expose both plant varieties to different temperature and CO2 combinations. In some cases, CO2 levels were higher, and in other cases, temperature was higher. Most importantly, in one of the enclosures plants were grown in conditions with elevated levels of both CO2 and temperature, mimicking those we’re predicted to experience in the future.

The experiment ran for three years, during the course of which the researchers harvested the plants, counted the seeds they had produced, and weighed them.

Under conditions of heightened temperature and CO2, the analysis showed, the regular soy plants had experienced a decline in productivity of 11 to 22 percent, when compared to other growing conditions.

However, the modified plants did not. In fact, under the higher temperatures and boosted CO2, they remained just as productive, seemingly unaffected by the harsher conditions. Compared to their counterparts, they actually produced more seed pods, and their seeds turned out to be bigger, too. “This suggests that expression of FBP/SBPase in soybean may help to prevent yield losses in the likely scenario where CO2 and temperatures will increase together under future climate conditions,” the researchers write in the paper.

Notably, these results were most significant under the twin effects of boosted CO2 and hotter temperatures. This suggests that instead of viewing temperature and carbon dioxide levels in isolation, as is often the case, it’s important to explore how the two will interact to impact future crops, the researchers say.

For now, the finding is a step towards making soy yields more predictable, and possibly limiting the land required to farm this crop.

But it’s just one option in a fleet of potential solutions that scientists around the world are exploring by experimentally tweaking soy genes, the researchers say. “When we’re trying to meet our food needs for the future, this specific modification is one of the many tools that we’re going to need to rely upon.”