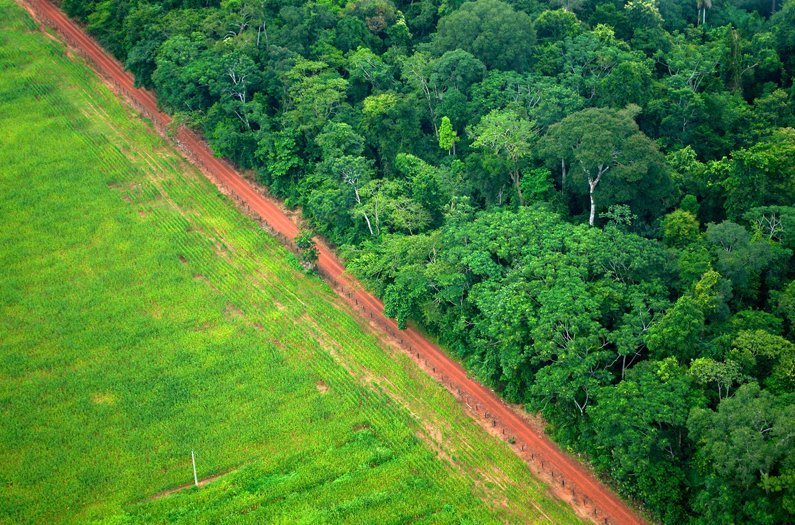 In Brazil, signs that a soy moratorium is slowing down deforestation

In 2006, the soy industry introduced a moratorium on certain types of soy farming in the Brazilian Amazon. Now, say a group of researchers, there are solid signs that it has succeeded in dramatically slowing regional deforestation.
By Emma Bryce
May 5, 2017

For such a tiny bean, soy has done a huge amount of damage, destroying untold hectares of South American rainforest over the decades. In the mid-2000s the situation became so dire that the soy industry brought in the Soy Moratorium. This ambitious policy is designed to stop companies from buying soy grown on land that was newly deforested in Brazil after 2006. Now a PLOS One study, led by University of Kansas researchers, shows that despite lurking skepticism, the moratorium appears to have worked, bringing about reduced deforestation rates in one of the Amazon’s most intensively-farmed states.

Called Mato Grosso, this Brazilian state produces 85 percent of the Amazon’s soy. But it’s also defined by its wetlands, grassy cerrado plains, and, mostly, its dense rainforest, making it the ideal place to examine the moratorium’s regional impact.

For the study, researchers looked at landscape-level changes, pre-moratorium (2000 to 2006) and post-moratorium (2007 to 2014). They relied on existing high-resolution satellite datasets that imaged Mato Grosso’s land cover for this 14-year period, and precisely identified soybean crop cover and density. That was paired with regional deforestation data. The researchers also carried out hundreds of surveys with Mato Grosso farmers to find out about their present and historical land use: that provided a ground reference to accompany the satellite data.

Under analysis, these combined data revealed a noticeable plunge in deforestation soon after the 2006 moratorium took effect—much larger than had been previously recognized. In fact, rates of deforestation in the state were more than five times higher before the moratorium than after. The researchers also calculated that the rate of forest-to-soy conversion, specifically, dipped from 9.4 percent to 3.9 percent in the years after 2006. “Deforestation is still happening, but it has slowed, and less of this land is being used for soy production,” explains lead author Jude Kastens.

Alongside reduced deforestation rates, the researchers noted that post-moratorium, rates of soy production on existing cropland have also increased, with more farmers practicing crop cycling—switching between soy and corn to maximize land use in different growing seasons. This could be attributed to the moratorium’s trickle-down effect: instead of using recently deforested land to grow soy, farmers appear to be intensifying production on existing plots.

Of course, deforestation is still a complex and ongoing problem. The researchers note, for instance, that even if it’s being driven less by soy production, there’s still an incentive to keep on clearing forest in order to grow other crops—which continues to happen on some soy farms.

Nevertheless, the study comes at an opportune time: in May 2016 the soy industry decided to renew the Soy Moratorium indefinitely. This research provides at least some valuable, data-driven evidence that the policy is worth its salt.