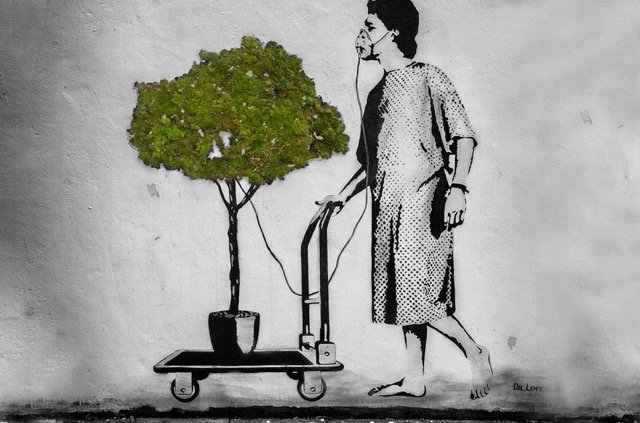 The sheer scale of biomass plantations that would be required to meaningfully mitigate our carbon dioxide emissions is mind-boggling—and likely to involve unbearable human or environmental costs.
By Sarah DeWeerdt
May 30, 2017

Trees are often touted as a strategy to fight climate change. They take up carbon from the atmosphere and store it in their wood, leaves, and roots—all the while providing pleasant greenery and wildlife habitat, to boot.

The idea is so attractive that some people plant trees to counteract their own individual carbon footprint. And global climate-change mitigation scenarios often include biomass plantations, where fast-growing trees or herbaceous plants like switchgrass would remove carbon dioxide from the atmosphere.

But until now, no one has taken a close look at what it would take for that strategy to have a real impact on atmospheric carbon dioxide levels.

In a study published in May in the journal Earth’s Future, a group of European researchers made those calculations. They used a computer model of global vegetation to determine how extensive biomass plantations would have to be in order to hold the increase in global average temperature below 2° C under different emissions scenarios.

The results aren’t comforting. The sheer scale of biomass plantations that would be required to meaningfully mitigate our carbon dioxide emissions is mind-boggling, and likely to involve unbearable human or environmental costs.

Suppose, for example, we continued on a “business-as-usual” pathway for now, and then had a collective change of heart after blowing past the 2° C mark—considered an important threshold for preventing the worst consequences of climate change—around mid-century.

At that point, growing trees to mitigate carbon emissions would entail turning virtually all natural ecosystems on land into biomass plantations, the researchers calculated.

If all the world’s countries meet their emissions reduction targets under the 2015 Paris agreement, that will put us on track to a global temperature rise of about 2.5° C by 2100. To hold the temperature increase below 2° C in that scenario, we could also convert 10 percent of the world’s most productive agricultural land to biomass plantations.

But that would take a massive bite—over 40 percent—out of the number of calories produced by the global food system. And that wouldn’t be a good strategy in a world with 9 billion mouths to feed.

Even a strong emissions reduction scenario envisions using biomass plantations as a secondary strategy to pull 160 to 190 billion tons of already emitted carbon from the atmosphere. Achieving that would still require a lot of water and nitrogen fertilizer, as well as technological improvements to ensure that the carbon captured by the plants winds up permanently stored, rather than released back into the atmosphere.

Biomass plantations can contribute to climate change mitigation, the researchers say—albeit as a supporting actor rather than in a lead role. And we shouldn’t miss the chance to reforest degraded land, or protect forests so that they can increase and regain their capacity to store carbon.

But their calculations lead to an unmistakable conclusion. We can’t plant our way out of climate change. The only way to avoid disaster is to cut our carbon dioxide emissions—much faster and much more deeply than we’ve managed to wrap our heads around to date.