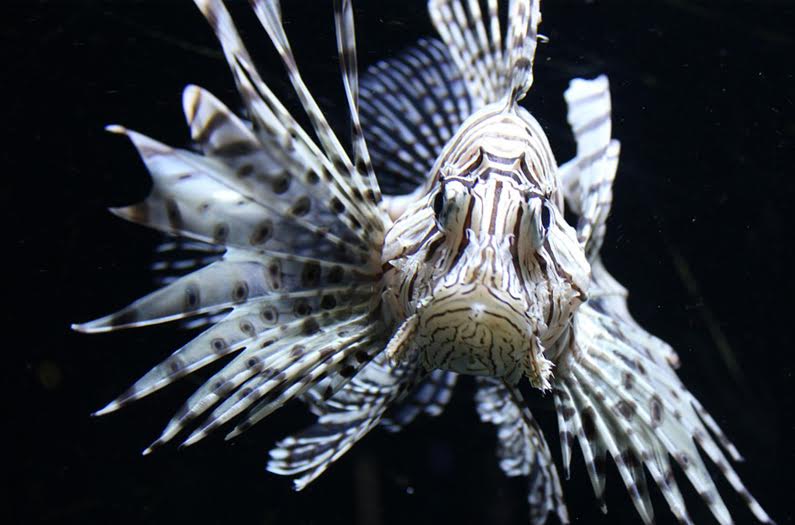 The trouble with lionfish control

Killing invasive species can indeed increase populations of other, desired species — but it’s not a one-size-fits-all approach. There’s lots of devils in the details. People shouldn’t just assume that it works.
By Brandon Keim
June 28, 2017

Since their introduction to the Caribbean in the early 1990s, Indo-Pacific lionfish have proved to be among the most troublesome invasive species around, voraciously consuming populations of native fish but rarely being eaten themselves. People have tried to control them with limited success. A new study underscores how difficult—potentially even counterproductive—controlling them is.

Writing in the journal Biological Invasions, marine ecologists led by Nicola Smith and Isabelle Côté of Simon Fraser University describe a two-year-long lionfish culling experiment off the Bahamian island of Eleuthera. There they assigned 12 reefs to one of three treatments: lionfish kills every three months, every six months, or not at all. At regular intervals they counted populations of lionfish and native prey fish, with the latter expected to rebound after the former’s demise. But that’s not quite what happened.

At first, biannual and quarterly lionfish culling reduced population densities by, respectively, 80 percent and 60 percent. Native species richness rose by about 30 percent, though biomass stayed the same: there was more diversity but not necessarily more life. Then, halfway through the study, Hurricane Irene hit—and lionfish numbers exploded in its aftermath. Compared to reefs where lionfish were left alone, their populations grew by 327 percent on quarterly culled reefs and a whopping 633 percent on biannually culled reefs. On the latter, native species richness dropped by 74 percent and biomass by 92 percent. That’s a lot of numbers, but they boil down to this: systematically killing lionfish reduced their populations, but didn’t have the expected ecological effects—and when a hurricane was added to the mix, as is inevitable in that part of the world, things went haywire.

Exactly why that happened isn’t yet clear. Much remains to be learned about the dynamics of lionfish colonization and species interactions. In the meantime, the question remains: What’s to be done with lionfish? The researchers caution against drawing definitive conclusions from this experiment. Data is still needed for other culling strategies in different regions and topographies. These results and others do suggest, though, that culling needs to be frequent and consistent to be effective. That requires time and resources that many communities don’t have. Intermittent culls, like those in the study, are the norm. It’s also possible that large predators, especially groupers depleted by overfishing to a fraction of historical populations, could reduce lionfish numbers or at least alter their behaviors, but that’s not certain.

As these questions are explored, the study “has implications for the effective management of invasive species in general,” says Smith. “In many instances, culling programs are initiated and maintained with little or no evaluation of their ecological effectiveness under ‘real-world’ scenarios of limited time and money.” Such assessments are “crucial,” Smith says. Killing invasive species can indeed increase populations of other, desired species—but it’s not a one-size-fits-all approach. There’s lots of devils in the details.