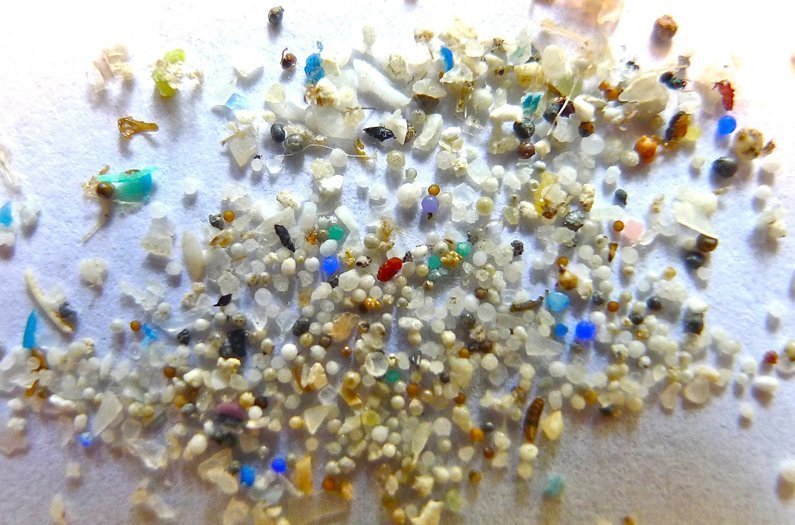 The new microbead substitutes are made from a plant-based fiber called cellulose. Waste from agriculture or the paper industry could be a source of abundant cellulose to make microbeads, researchers propose.
By Sarah DeWeerdt
June 20, 2017

Researchers from the University of Bath in England have developed biodegradable, plant-based microbeads that could one day replace the plastic version in a variety of consumer products.

Microbeads, tiny spheres of plastic less than half a millimeter in diameter, are found in a long list of toiletry items including toothpaste, sunscreen, hair gel, facial scrubs, hand cleansers, soaps, and shaving creams. They are also used in abrasives, paints, and other products.

Because they are plastic, the beads don’t break down in the environment, and because they are so small, they can’t be removed by filtration systems at sewage treatment plants. By some estimates, 100,000 microbeads may wash down the drain from a single shower, and as many as 8 trillion enter aquatic habitats every day in the US alone. The beads are ingested by tiny sea creatures and eventually may make their way up the food chain to humans.

Because of these concerns, plastic microbeads are being banned in a growing number of countries. The beads will be phased out of many personal care products in the US by next month, and the UK is expected to forbid their sale by late this year.

The new microbead substitutes, described in a report in the journal ACS Sustainable Chemistry and Engineering, are made from a plant-based fiber called cellulose. Waste from agriculture or the paper industry could be a source of abundant cellulose to make microbeads, the researchers propose.

People have tried to use cellulose as a microbead substitute before, but the manufacturing processes were expensive, not very efficient, and difficult to scale up. In the new method, which is cheap, energy efficient, and easily scalable, researchers dissolved cellulose and forced the solution through a glass membrane dotted with tiny, 10-micrometer holes.

On the other side of the membrane was a tube of fluid (sunflower oil bought at a British grocery store chain, because who says everything about science has to be impossibly esoteric) flowing perpendicular to the membrane. This caused drops of cellulose solution to shear off the membrane and travel suspended in the oil.

The researchers then poured the oil-and-cellulose mixture into a container of ethanol, which coagulated the cellulose droplets into hard beads. Finally, they soaked the beads in a chemical called glyoxal to create ‘cross-links’ between the cellulose molecules, making the beads stronger and smoother.

By tweaking parameters like the size of the membrane pores, concentration of cellulose, pressure across the membrane, flow rate of the oil, and degree of cross-linking, the researchers say they can make beads of varying sizes and hardness. The cellulose microbeads should be stable in tubes of toothpaste or bottles of body wash, but easily degraded by microbes in wastewater treatment plants or in the environment.

Still, it’s worth thinking about how this problem arose in the first place. Plastic microbeads were added to personal care products beginning in the 1990s to make toothpaste smoother, lotion more spreadable, and so on. But who remembers the late 1980s as an era of horrifyingly gritty toothpaste and frustratingly un-spreadable lotion? From a certain point of view, microbeads look like a solution to a non-problem that wound up creating a much bigger problem of their own.

The researchers point out that microbeads are used widely in “products that are, by their very nature, single use and designed to ‘wash away’ into the wastewater disposal system.” So basically we’ve added large quantities of an extremely persistent substance to our most ephemeral products. Developing environmentally friendly substitutes for problematic technologies is great. But we need to get a lot better at thinking through the life cycles of what we create so that problematic technologies don’t become the norm in the first place.