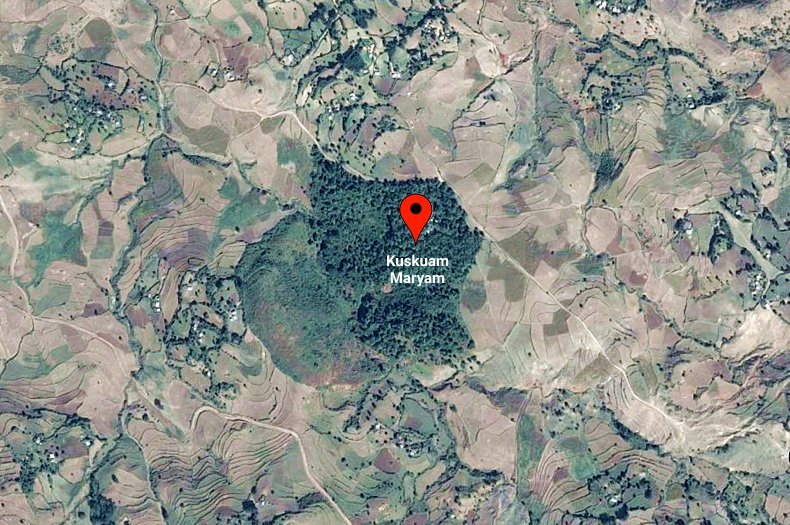 Where the churches are forests, too

Protected for centuries even as farmers cleared adjacent lands, the sacred forests surrounding buildings belonging to the Ethiopian Orthodox Church are islands of verdancy that now contain much of the region’s surviving biological heritage.
By Brandon Keim
June 7, 2017

In the midst of northern Ethiopia’s deforested landscapes stand churches: not just buildings belonging to the Ethiopian Orthodox Church, but also the sacred forests surrounding them. Protected for centuries even as farmers cleared the surrounding lands, they’re islands of verdancy that now contain much of the region’s surviving biological heritage. “They are small islands of native forest in the midst of these vast degraded agricultural landscapes,” says Travis Reynolds, an environmental scientist at Colby College, providing “glimpses of the biodiversity that was once there.”

The forests have fascinated ecologists, who’ve previously described the plant species and habitat types found there. Reynolds and colleagues add to that with a study published in the African Journal of Ecology, describing the sediments and insects found in four church forest streams. Those might seem mundane subjects of inquiry, but they’re emblematic of stream health—and just as the forests are vital to local life, so are the streams.

Their microbial communities process nutrients, store carbon, and clean water for the people and other animals who rely on them. They’re also “a good window into what’s happening on the landscape,” says study co-author Denise Bruesewitz. An excess of sediment bespeaks erosion in surrounding lands. Algae blooms signify nutrient pollution, and as sensitive insect species won’t tolerate those conditions, they’re indicative of aquatic health.

As streams entered the forests, the researchers found them to be dirty and impoverished, overloaded with sediments and dominated by a few stress-tolerant species.  By the time they left the forests, they were clean and full of life. Suspended sediments and organic matter levels dropped by one-third and one-half, respectively. By a metric called the Hilsenhoff Biotic Index, which combines insect abundance and stress tolerance, insect communities were nearly twice as healthy just 100 meters inside the forest. Even in that short distance, the waters were transformed. The forests are like ecological kidneys, filtering away humanity’s ravages.

Read:  Insect farming byproducts are piling up. They could be fertilizer in a circular agricultural system.

The results speak to the present importance of church forests and what might yet be possible. There are more than 12,000 such forests in the region, at every latitude, longitude, and elevation, of various sizes and management strategies. “Many different forest communities are represented in these scattered patches,” says Reynolds, and they serve as reservoirs of plants and animals now found nowhere else in the region. They also demonstrate the ecosystem services provided by different types of forest.

Sacred as they might be, though, Ethiopia’s church forests are under pressure by grazing and agricultural expansion. The researchers eventually hope to identify which management strategies work best and to make a case for the services provided—not just water filtration, but also food and wood and shade — that might be enjoyed if church forests are expanded and nourished across the region. Ultimately, says Reynolds, the researchers might show that larger, more-diverse, less-impacted forests yield the most benefits of all: a secular argument as well as a spiritual one, by which these forests might be protected for centuries to come.