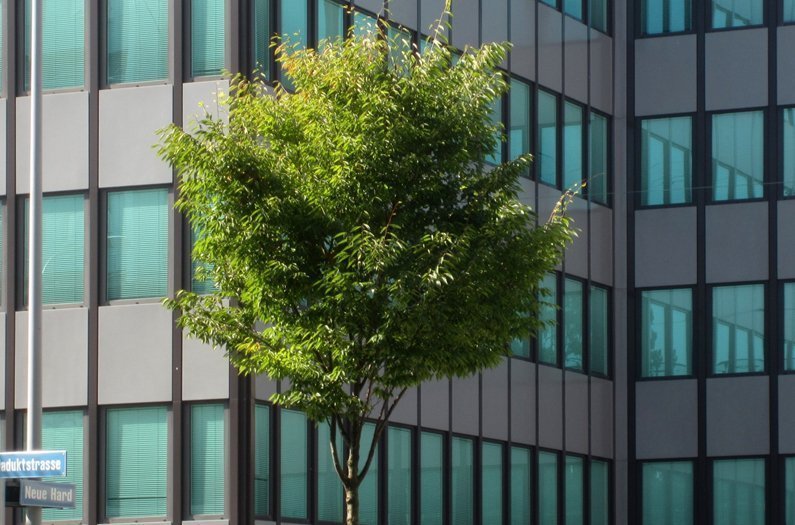 Trees have gained the reputation as the “green lungs”of a city—pulling pollutants out of the air and returning oxygen. But a new study complicates that picture.
By Daniel Strain
July 6, 2017

In public perception, trees have gained the reputation as the “green lungs” of a city—pulling pollutants out of the air and returning oxygen. But a new study complicates that picture. Research from the metropolis of Berlin shows that green spaces, from forests to public parks, can intensify ozone pollution in cities, an effect that is pronounced during heat waves. During a bad hot spell in 2006, plants in Berlin contributed to as much as 60% of the observed ozone pollution, with potential risks for the health of city-dwellers.

The problem, the researchers report in Environmental Science & Technology, comes down to a class of chemicals called volatile organic compounds, or VOCs. Plant leaves pump out VOCs naturally. But some of these gases can also kick off chemical reactions in the air that form ground-level ozone—a pollutant that is harmful to people, especially those with preexisting respiratory disease. Summer is a big concern because plants increase the amount of VOCs they emit during hot weather.

To see just how much trees and other greenery could influence air quality in cities, a group of German researchers turned to a nasty heat wave in the summer of 2006. The German capital is an ideal laboratory: Green spaces like Tiergarten park, home to landscaped forests and even a lakeside beer garden, occupy about 35% of the city’s area.

The researchers monitored air at sites around Berlin and the surrounding countryside throughout the 2006 heat wave. Then, using computer simulations, they calculated how much trees contributed to ozone pollution in the city. The results were potentially worrisome: Berlin’s green areas were responsible for 12% of ozone concentrations, on average, during the summer of 2006, an influence that peaked during the hottest part of the year in July.

It’s hard to say what impact this upswing had on Berliners. The heat wave caused mortality rates around the city to climb by 20%, and ozone pollution could worsen the health impacts of hot weather, the researchers write. They don’t, however, recommend purging the city of green life. Trees bring a lot of benefits to an urban area. They cool cities down and pull other unwanted gases, such as carbon dioxide, out of the air. Spend an afternoon in Tiergaten, and you’ll see Berlin residents and tourists enjoying other benefits, too, from jogging to sightseeing.

But the team argues that it may be important to combine tree planting campaigns with efforts to cut down on air pollution, such as from car exhaust pipes. It’s a win-win for lovers of clean air and German brews.