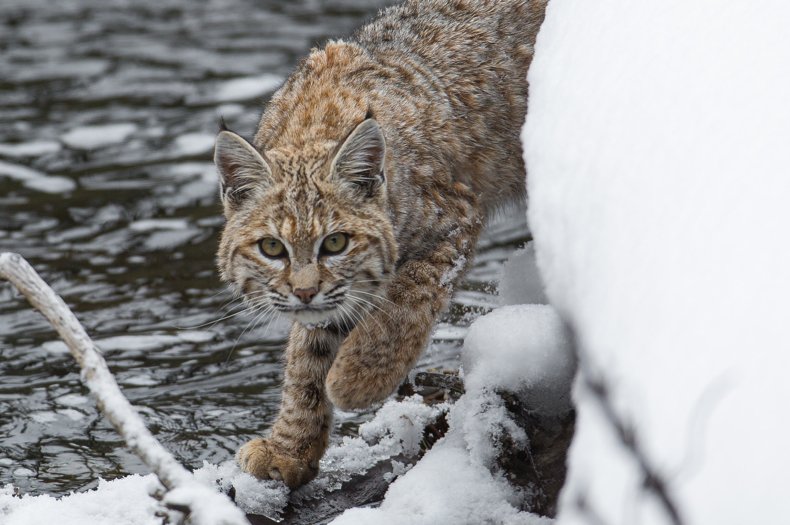 What is a bobcat worth? There’s a few ways of thinking about that question. One answer, of course, is that a bobcat’s value is intrinsic, their lives not something to signify with a price tag. Fair enough. But for the sake of discussion, and because there’s already a market for their hides, let’s run the math: in the state of Wyoming, a bobcat is worth roughly $300 dead and up to $308,000 alive.
By Brandon Keim
July 19, 2017

What is a bobcat worth? There’s a few ways of thinking about that question. One answer, of course, is that a bobcat’s value is intrinsic, their lives not something to signify with a price tag. Fair enough. But for the sake of discussion, and because there’s already a market for their hides, let’s run the math: in the state of Wyoming, a bobcat is worth roughly $300 dead and up to $308,000 alive. And in that vast difference is a tension — some would call it a flaw — in the way these marvelous cats, and many other species too, are presently managed in North America.

The calculations come from a study recently published in the journal Biodiversity and Conservation. Led by Mark Elbroch, a biologist with Panthera, the wild cat conservation organization, and also featuring researchers from wildlife advocacy group Wyoming Untrapped, the researchers totaled the revenues generated in 2015-2016 from selling trapping licenses in that state — $152,000 — and divided them by 1,160 bobcats killed, then added the average sale value of pelts. The final per-bobcat value came to $315.17.

Then Elbroch’s team turned to the example of a bobcat living along the Madison River in Yellowstone National Park, where his predilection for hunting waterfowl made him popular among wildlife lovers. They surveyed 46 photographers who traveled to Wyoming in winter 2015-2016 and the outfitters who guided them. Between outfitters’ fees, money spent on food, lodging and travel, and revenues from selling pictures, the bobcat generated $308,105, or a thousand-fold increase from his worth as a source of fur alone.

The researchers don’t argue that every living bobcat in Wyoming is worth more than $300,000. Clearly that’s not the case — there’s a limit to how many people want to photograph the animals, demand for high-end bobcat pictures isn’t infinite — but it’s also not the point. Rather, Elbroch’s team wanted to demonstrate that bobcats can be worth far more than their hides and the cost of a trapping license. Hunting and trapping, however, remains the ethos by which these cats are managed in Wyoming and elsewhere.

Thirty-nine U.S. states and eight Canadian provinces allow bobcats to be hunted or trapped. Only 13 states and four provinces have any limits on the number killed. It’s a recipe for trouble, reminiscent of 19th- and early-20th century wildlife slaughters that prompted the system of regulated consumption that now guides the management of most game species. And trouble there is: in 2013, the surging fashionability of fur in Russia and China drove the price of bobcat pelts to a peak of more than $1,000, which led to a spike in trapping and a decline in the cats’ populations.

Read:  The insect apocalypse is more nuanced than it first appears

The last bit is difficult to empiricize, though, because bobcats are notoriously difficult to count and trapping so poorly monitored. The researchers recommend that all states and provinces require better reporting and permits for selling hides; set ecologically sound limits on the number killed; and manage bobcats as game species. That’s at least a first step towards making bobcat trapping sustainable. Not every bobcat will generate so much money as the one from Madison River, but there are still considerable tourism opportunities jeopardized by mismanagement. “Potential exists everywhere,” says Elbroch.

Reforms don’t need to end there. “Current bobcat regulatory policies across North America do not reflect current cultural values, inclusive of both consumptive and non-consumptive use of wildlife,” write Elbroch’s team. They urge wildlife managers to “look beyond” a status quo that “prioritizes hunting and trapping constituents over non-consumptive users.” Embracing the value of ecotourism is a start. Another possible remedy, not addressed in the study but acknowledged by Elbroch in an e-mail, is to include people who aren’t hunters or trappers in the governmental agencies and committees responsible for most wildlife management in North America. That’s what happened in California, where bobcat trapping was banned in 2015.

A forward-looking approach to conservation could also involve finding ways for non-consumptive pastimes to fund state wildlife agencies, perhaps through a tax on camping gear, much in the way that taxes on hunting supplies now do. At present wildlife agencies “depend almost completely upon hunters and fishermen to fund their programs,” says Elbroch. “This is not only short-sighted. It’s poor economics.”