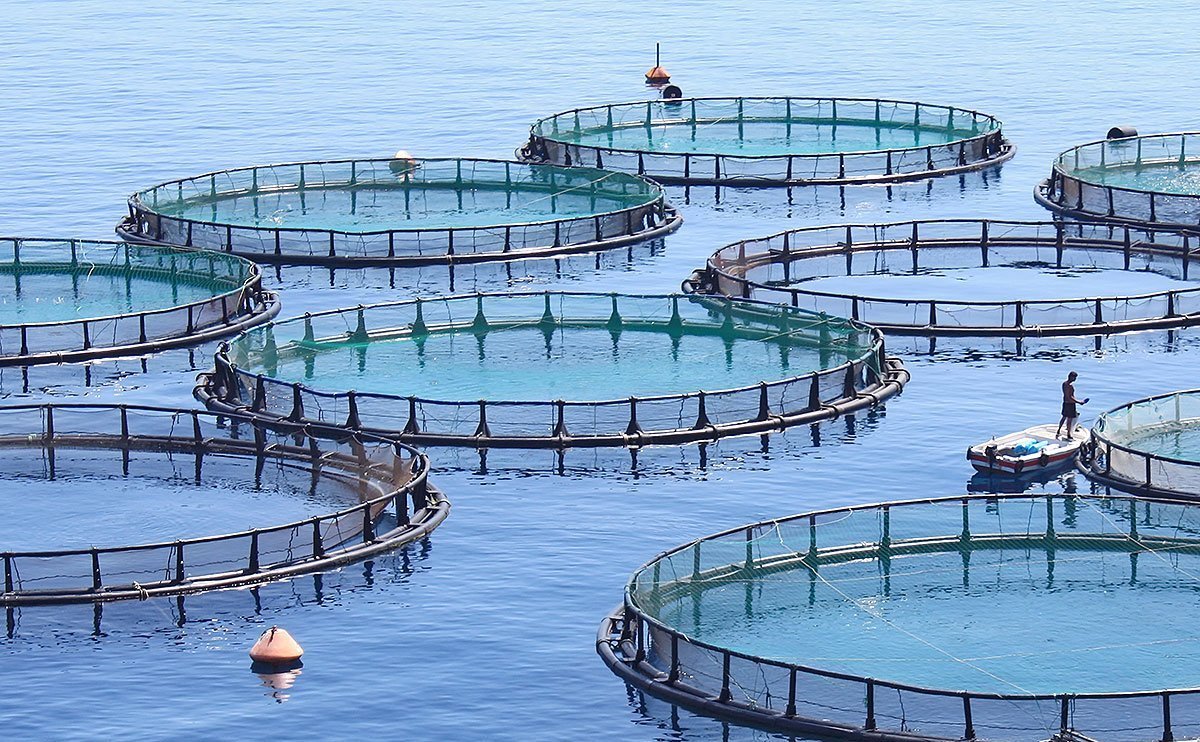 By farming fish in the ocean, the world could far surpass its seafood needs

If we produced fish in all the suitable ocean space available globally, we could easily meet the global appetite for seafood and ensure food security, researchers have calculated. But they caution that the development of this sector would need to be kept in line with environmental concerns.
By Emma Bryce
August 18, 2017

If we started farming fish in all the suitable offshore habitat available globally, we could technically produce 100 times our current seafood needs, a new study reveals. Writing in Nature Ecology and Evolution, a group of researchers makes the case that this form of food production has the potential to solve some of our most pressing food security challenges, and to take the pressure off wild fisheries, too.

Fish and bivalve farming–called aquaculture–has gained attention in recent years as one possible way to secure enough protein for the planet’s burgeoning population. “Oceans represent an immense opportunity for food production, yet the open ocean environment is largely untapped as a farming resource,” the University of California, Santa Barbara-led researchers write in their paper. Theirs is the first study to put an estimate on that untapped potential.

To do so, first they selected 180 consumable species of finfish and bivalves like oysters and molluscs. Then they chose suitable aquaculture habitat based on the conditions those species require to thrive, such as depth and water temperature. Next, the researchers eliminated other types of unsuitable habitat for fish farming–like areas dedicated to marine reserves, high-traffic shipping zones, and waters deeper than 200 metres, where it would be too costly to anchor fish farms.

Through this process of elimination, the researchers were able to identify aquaculture ‘hotspots’ around the world–finding that there are almost 13 million square kilometres of suitable open-ocean habitat globally available for fish and bivalve farming. Together, these productive waters could produce about 15 billion tons of seafood each year, surpassing our current-day seafood needs 100-fold. The study also found that every coastal country on earth is capable of meeting its domestic seafood needs by using just a small percentage of its coastal waters to farm fish–which could ensure food security and also reduce the reliance on imports. If just one percent of the Indonesian coastline was reserved for aquaculture, for instance, it could produce 24 million tons of fish a year, more than enough to satisfy the national appetite for seafood.

Farming fish on this scale could also take the strain off wild fisheries, which are threatened by climate change–and are also the cause of stock declines through overfishing. Aquaculture isn’t necessarily a fault-free solution, however: fish farms have developed a negative reputation in recent decades for causing largescale nutrient pollution and the spread of diseases and parasites from farmed to wild fish. With this in mind, the researchers caution that aquaculture development would need to be closely aligned with policies and practices that protect the environment. Fish farming is now the fastest-growing food sector; it’s important to consider how to take its progress forward sustainably to limit the considerable environmental risks, they say.

The huge potential scale and productivity of aquaculture nevertheless makes it clear that countries would theoretically have the option of protecting the environment, while still maximising profits. Says lead author, Rebecca Gentry, “There’s so much area available that there’s a lot of flexibility to think about how to do this in the best way for conservation, economic development and other uses.”