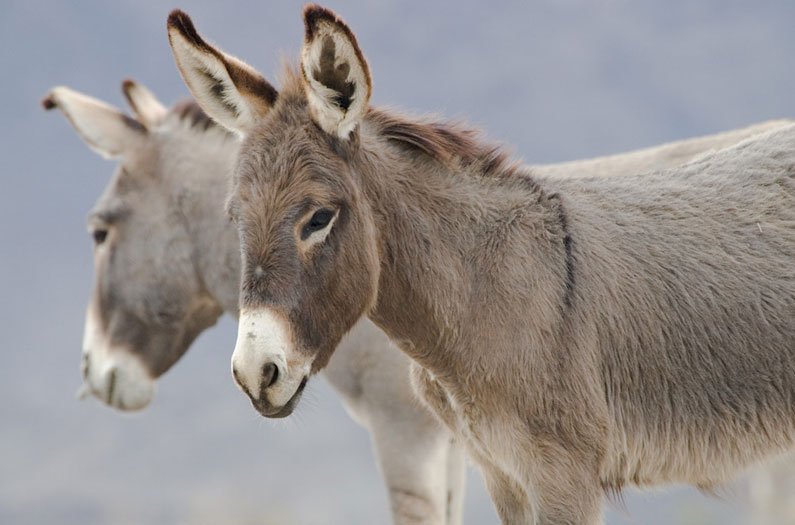 Big, non-native mammal invaders: not a problem, but a solution.
Even as native populations of large-bodied herbivores fall at alarming rates, others of their kind are thriving in new locales — yet they’re often regarded as unwelcome aliens, a source of environmental catastrophe. It’s a strange dichotomy, say some conservationists, and one that’s blinded people to the potential importance of these so-called invaders.
By Brandon Keim
August 23, 2017

Even as native populations of large-bodied herbivores fall at alarming rates, others of their kind are thriving in new locales — yet they’re often regarded as unwelcome aliens, a source of environmental catastrophe. It’s a strange dichotomy, say some ecologists, and one that’s blinded people to the potential importance of these so-called invaders.

Rather than a problem, these introduced megafauna — such as wild horses and donkeys in North America, or dromedary camels and wild cattle in Australia — may restore a richness that’s largely vanished from our landscapes. The decline of big herbivores didn’t begin recently; it dates back thousands of years to the Pleistocene, when dozens of megafauna species went extinct. From a deep-time perspective, landscapes that seem normal to us are in fact impoverished. They might yet be replenished.

“In the Pleistocene, the ecological influences of herbivorous megafauna on disturbance regimes, seed dispersal, nutrient cycling, and community structure were ubiquitous,” write researchers in the journal Ecography. “Introduced megafauna have potentially augmented this lost functional and taxonomic diversity across most continents.” Or, in the less-academic words of lead author Erick Lundgren, a biologist at Arizona State University, “This paper offers a vision of a very real and wild world yet unseen.”

Lundgren and colleagues first review the global status of large, vegetation-eating mammal species. Of 74 now remaining, no fewer than 44 are threatened with extinction in what are considered their native ranges. That’s a tragedy in itself; it also has profound ecological effects. Like their now-extinct counterparts, contemporary megafauna are ecosystem engineers. Their very footsteps and grazing patterns foster abundance and richness. In their absence, ecosystems can become simplified and less verdant.

Rarely considered, though, is whether introduced species ranges may perform similar roles. Some twenty-two big herbivores now have established populations outside their native ranges, where most are actually threatened or endangered. “Reductions in species richness on all continents since the Pleistocene have been counteracted by gains from introduced megafauna,” write Lundgren’s team. And though they’re often perceived, at least by many conservationists, as unnatural, Lundgren’s team argues that these introduced species carry on an ancient ecological legacy.

Discover more:  What are the world’s 35 biggest meat and dairy companies doing to mitigate climate change?

In the Netherlands, wild horses and cattle create grassland patches in forests. Dromedary camels, who are able to eat plants that grown in highly saline waters, help spread essential salts across their territories. Lundgren is especially interested in wild donkeys. Descended from animals introduced to the American southwest by Spanish colonizers, they belong to the same genus as now-extinct stilt-legged horses who once roamed the Americas. Not often appreciated, says Lundgren, is the donkeys’ ability to sense fresh water, digging springholes that become oases for other desert life.

Seen this way, introduced megafauna are vehicles for “rewilding,” as attempts to restore lost ecological processes are known. That idea might ruffle some feathers: animals like wild boar and horses are widely perceived as destructive, and the researchers acknowledge that introduced megafauna “can exert strong grazing or browsing pressure to the detriment of other species.” Yet these problems, they say, usually result from an absence of predation. Rather than blaming — and killing — wild horses, people might try to protect mountain lions, who are frequently hunted in areas where wild horses are considered overpopulated.

The tendency to focus on introduced-species problems while underestimating the importance of predation has skewed our perceptions, say Lundgren’s team. “The majority of studies are conducted on the premise that introduced species are harmful and should be suppressed or eradicated,” they write. Being open-minded could make for better science and also unite conservationists with people sympathetic to these animals.

Lundgren says that open-minded approach is also practical. “If we want the functional group of large herbivores to survive their current declines, shouldn’t we protect them wherever they are able to live?” asks Lundgren. “If we were to eradicate horses in America and then horses in Mongolia go extinct, have we contributed to our aim to stem the sixth extinction?”