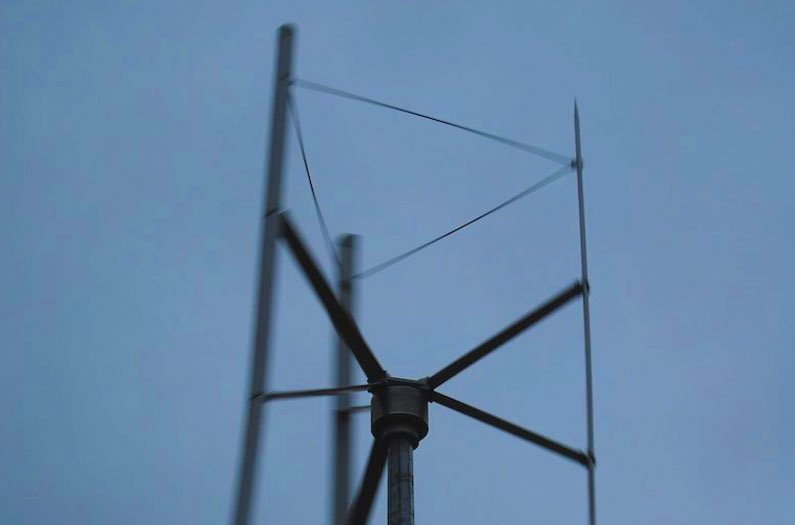 When Backyard Wind Is Cheaper than Fossil Fuels

While solar panels are spreading across rooftops, wind power today comes mainly from grid-tied farms of massive turbines with propeller-like spinning blades. Smaller, cylindrical wind turbines that can go on rooftops and in city squares could make wind power more widespread. But they are typically inefficient.

Now mechanical engineers at the University of Utah say that such vertical-axis wind turbines, if designed well, could financially compete with fossil fuel electricity.

Large conventional turbines can harness more wind for generating power. By contrast, vertical-axis turbines, which look like egg-beaters or cylinders, can be unstable at high speeds, have lower power output, and brake frequently in unsteady winds. Their advantage is that they can be packed closely and can generate more power if arranged optimally on a wind farm.

Lam Nguyen and Meredith Metzger wanted to study how such turbines could be optimized for urban and suburban settings. They analyzed the performance of various designs in unsteady wind conditions. They considered 13 turbine designs, considering four key design parameters: height-to-diameter ratio, the blade shape, the turbine’s solidity, and moment of inertia.

The engineers gathered actual wind data over a year at nine different urban and suburban sites around Oklahoma City, Oklahoma. The instruments were installed on the top of traffic posts at a height of 9 meters from the ground.

Feeding this wind speed data into a computer simulation, the researchers determined the amount of energy that each design captured over a year of operation. Comparing this to the total available wind energy in that time period allowed them to calculate turbine efficiency.

They found that the optimal turbine design the optimal wind turbine design capable of harvesting the most energy from the gusty winds was found to have an aspect ratio of 1.2, a solidity of 12 percent, and a symmetrical blade shape that is 15 percent as thick as it is long.

The duo also analyzed the levelized cost of energy (LCOE) at the test sites and found that four of the suburban sites could be economically viable for a small vertical axis turbine. At one site, the optimal turbine produced electricity at a cost 10 percent lower than the average national electricity unit price, meaning wind was cheaper than fossil fuels at this location. The results are in the Journal of Renewable and Sustainable Energy.

“VAWTs could economically harvest wind energy in the urban center as well if the turbines were located higher than 9 m, such as on the rooftops of commercial/residential buildings,” the researchers write.

According to a recent report by Grand View Research, the small wind market will be worth $1.75 billion by 2025, and vertical-axis turbine technology will have the fastest growth in terms of revenue.

Source: Lam Nguyen and Meredith Metzger, Optimization of a vertical axis wind turbine for application in a urban/suburban area. Journal of Renewable and Sustainable Energy. 2017.