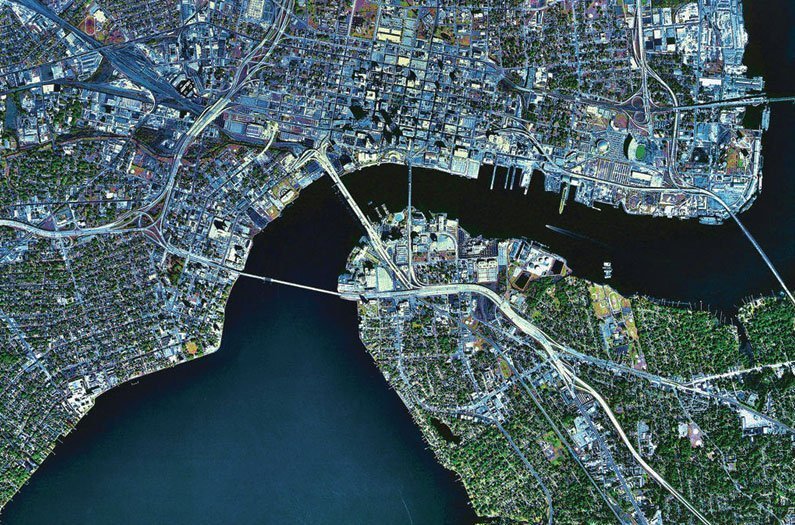 As a city grows, its impact on rivers doesn’t have to

The infrastructure of U.S. cities alters rivers and their biodiversity both upstream and downstream for tens or even thousands of kilometers.
By Sarah DeWeerdt
August 22, 2017

Throughout history, cites and towns have often been established along the banks of rivers, because these waterways provided a source of drinking water, power, and transport links to other communities. The effects of our settlements on those riverbanks – on terrestrial ecosystems – are easy to see. But because we’re mostly land animals, the urban transformation of environments below the water’s surface has gone relatively unnoticed.

Now, researchers have undertaken the first comprehensive study of how the infrastructure of U.S. cities alters rivers and their biodiversity. The effects are extensive, they reported yesterday in the Proceedings of the National Academy of Sciences, extending both upstream and downstream for tens or even thousands of kilometers like the branches of a nerve cell.

The researchers used data on river hydrology from the U.S. Geological Survey in a computer model to determine the effects of urban land transformation, electric power, and municipal water supplies on rivers nationwide. They also pulled information from a fine-grained database of species occurrence to assess the biodiversity of freshwater fish, mussels, and crayfish in urban-affected stream reaches.

The largest impacts are from urban land cover and electricity production, the researchers found. These aspects of infrastructure have altered at least 7% of the entire length of streams and rivers in the contiguous United States. “Although these estimates may not seem extensive, they result in very large biodiversity impacts,” the researchers write.

Urban infrastructure impacts 60% of all freshwater fish, mussel, and crayfish species in North America, over 1,200 species altogether. It has contributed to local extinctions of 260 species, sometimes in stream reaches distant from city boundaries themselves. It also influences 970 existing native species, 27% of which are threatened or endangered.

“Cities can impact far reaching areas due to the sheer intensity of resource demands,” the researchers write. For example, the energy and water infrastructure of Atlanta, Georgia stretches across four major river basins.

Moreover, the stresses from urban infrastructure are often compounded because multiple cities may be located on the course of the same river. Twenty-one cities lie along rivers downstream of Atlanta.

Surprisingly, however, the researchers found little connection between a city’s size and the severity of its effects on rivers. Atlanta’s infrastructure impacts 12,500 stream kilometers, and has contributed to 100 local extinctions of freshwater species. Las Vegas, Nevada has a similar population size, but impacts less than 1,000 stream kilometers and has contributed to only seven local extinctions.

Some of these differences have to do with differences in the layout of stream networks and the number of species found in the eastern compared to the western United States. But the findings also suggest that as a city grows, its area of hydrologic impact doesn’t necessarily have to expand along with it. For example, cities could check their impact on rivers by managing storm flows better, or choosing sources of electric power that minimize water use.

There are surely tradeoffs involved in such strategies (choices that take less of a toll on rivers may come with greater impacts on some other habitat). Still, the idea that city governments can not only cause ecological harm but also contribute to ecological integrity far beyond the city limits sounds like good news in an urbanizing world.