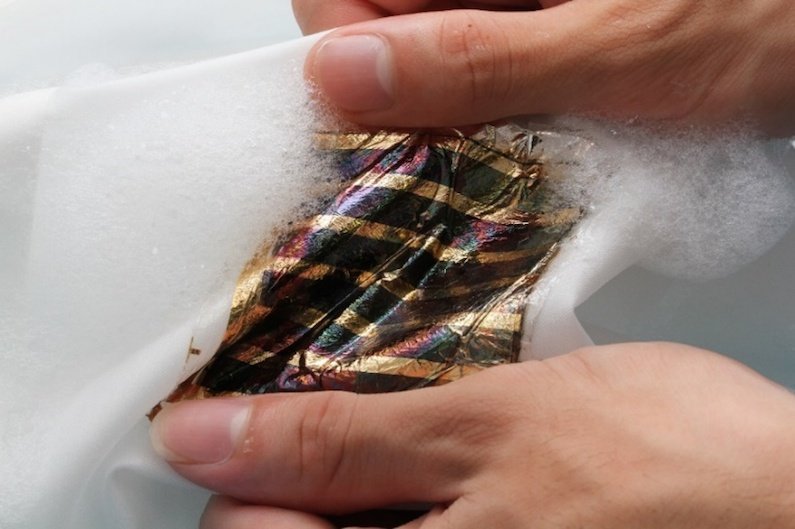 A Washable, Stretchable Solar Cell For Clothes and Awnings

Engineers have made stretchable, washable cells that could be incorporated in clothing to power wearable devices and sensors, and could lead to power-generating awnings, shades, and tents.
By Prachi Patel
September 21, 2017

Engineers have made a new solar cell that works well even after being washed. The stretchable, water-resistant cells could be used to make clothes that can power wearable devices and sensors. They could also lead to power-generating awnings, shades, and tents.

Conventional solar panels are made of rigid silicon. Thin, flexible solar cells made of organic polymers are less efficient, but are easy and cheap to manufacture. This has made them attractive for large-area, flexible devices, especially as scientists have in recent years improved their efficiency and longevity; organic solar cells can degrade when exposed to water and oxygen. They went from efficiencies of 2 percent in 2007 to over 8 percent in 2016.

In the past ten years, researchers have been trying to incorporate organic photovoltaic cells into textiles. Several companies have been using solar textiles to make products like makeshift emergency shelters, awnings, and outdoor gear.

But these solar textiles are not perfect. “It is difficult for them to “simultaneously achieve high efficiency, mechanical durability/stretchability, stability in air and water/washability,” write engineers from Japan’s RIKEN Center for Emergent Matter Science in their Nature Energy paper.

The challenge is the tradeoff between making solar cells pliable and resistant to water and air exposure. That’s because organic solar cells are encapsulated inside soft rubbery films to protect them from moisture and air. But the encapsulation layers have to be ultra-thin for flexibility and stretchability films, which compromises the protection they offer.

The RIKEN team overcame this difficulty by double-wrapping solar cells. They first sandwiched an ultrathin organic solar cell between two one micrometer-thick layers of parylene, a water-repelling polymer that is used to coat computer circuit boards and medical implants. Then they encapsulated the device between two acrylic-based elastic films. The transparent coatings let light through but are barriers to water vapor and oxygen.

The stretchy solar cell had an efficiency of nearly 8 percent. That efficiency dropped by only around 5 percent when the device was soaked in water for two hours. And the device retained 80 percent of its efficiency after twenty wash cycles, where it was squeezed by nearly half while wet.

A device that was 4 cm to a side generated over 15 milliwatts of power. “Because low-power microchips and wireless modules for wearables need power supplies of a few to several milliwatts, our washable OPV modules show promise as an ideal power source for many kinds of wearables,” the researchers say.