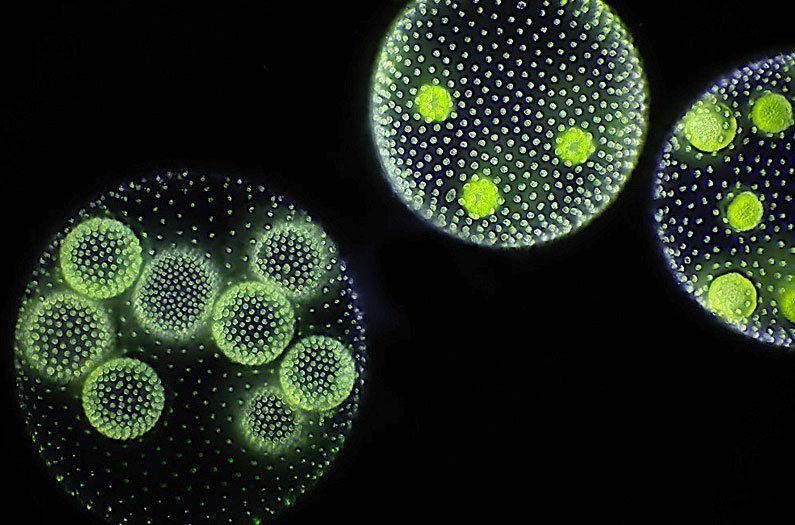 Researchers have identified the mechanisms algae use to photosynthesise and grow so rapidly. In the future, these traits could be transferred to some of the world’s most important staple crops, to boost their yields and grow more food.
By Emma Bryce
September 29, 2017

Algae are phenomenal carbon fixers. In fact, they are responsible for one-third of the carbon fixation that occurs globally. They suck up vast quantities of carbon dioxide, covert it into sugars through photosynthesis, and grow in gigantic blooms over vast water bodies.

Now scientists have cracked the code behind algae’s ability to intensify photosynthesis—and think they can potentially apply it to staple crops such as rice and wheat to enhance their production, too.

The cellular apparatus that makes algae growth possible is called a carbon-concentrating mechanism (CCM), which works by bringing carbon into close proximity with enzymes that quickly convert it into sugars. In algae, that process occurs within a structure called the pyrenoid that’s situated inside the organism’s chloroplasts. The researchers’ main aim was to identify, for the first time, the proteins that make up the pyrenoid and allow it to do its job.

The research took place over the course of two studies, jointly published in the journal Cell. In the first, the Princeton University-led academics focused on a green algae called Chlamydomonas reinhardtii. Using a protein-tagging technique developed for the study, they screened the algae for different kinds of proteins in the pyrenoid. Once they had isolated the proteins, they examined how these functioned and interacted with one another, building up a complex map of their relationships inside the pyrenoid.

In total, this screening process highlighted 89 previously-unidentified pyrenoid proteins: the researchers now know these play hugely varied roles in managing the algae’s CCM. For example, some of the proteins are thought to actively transport carbon into the cells, while others are responsible for maintaining the structure of the pyrenoid itself.

The discovery provides “a detailed blueprint of the algal CCM, revealing dozens of new targets for transfer into crop plants,” the researchers write. That lays the path for further research into the proteins’ precise functions. And with this information, wheat, rice, and other crops essential to global food security could feasibly be engineered to include the carbon-concentrating traits that algae possess.

In theory this growth boost could give them an inbuilt safeguard against extreme heat, drying trends, and other factors that are expected to limit future crop yields. “Due to a rapidly rising global population and a finite agricultural land area, novel approaches are essential to maintain food security,” says the study’s lead author, Martin Jonikas. “If we could engineer other crops to concentrate carbon, we could address the growing world demand for food.”