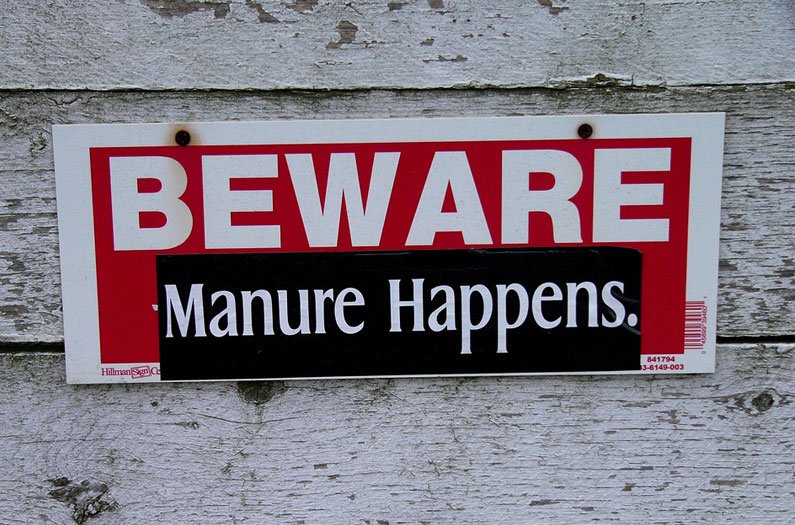 Farmers typically spread manure across the surface of their farmland to fertilize crops. But new research shows that if they simply bury it in the soil, it minimizes the huge threat of estrogen runoff into nearby water bodies.
By Emma Bryce
September 4, 2017

If farmers were to inject fertilizing manure into their soil, instead of spreading it across the surface as usual, they could cut out a major source of agricultural pollution, a group of Penn State University researchers has proved.

Manure is naturally abundant on livestock farms, and so it makes sense for farmers to recycle this animal waste to fertilize crops such as legumes and corn. But manure also has an insidious reputation as a polluter: when it routinely gets carried by rain- and snow-driven runoff from farms into surrounding water bodies, it leaches out phosphorus, nitrates, and hormones. That not only causes dead zones by depositing an excess of nutrients into the water, but estrogen–a hormone occurring naturally in manure–can also skew the gender balance in animals like fish and frogs, leading to long-term reproductive impacts.

One proposed solution has been to simply put manure into the soil instead of leaving it exposed on the surface. The Penn State researchers wanted to test out the effectiveness of this technique in the field–particularly for reducing estrogen runoff.

Writing in the journal Agriculture, Ecosystems & Environment, they based their experiment in central Pennsylvania on 12 test farm plots where corn was produced. On six of these, the researchers applied manure to the soil surface as a liquid slurry–a common practice. On the other six they used a machine to inject the slurry directly into the soil. Over the course of eight months there were nine runoff events, caused by rainfall and snowmelt. From each plot, the runoff was separately channelled through drainage pipes, and into huts where the researchers gathered samples. Ultimately, they analysed 75 runoff samples for phosphorus, nitrates, and estrogen.

Overall, the results showed drastically higher pollutant levels from the six plots with surface manure, compared to those with injected manure. That was especially notable for estrogen. Two days after the researchers began recording, there was a rainstorm: “That first flush washed off really high concentrations of phosphorus and estrogens relative to the entire rest of the study, but there was nothing from the shallow disk injection plots,” noted lead author Odette Mina.

In fact, at its highest levels, estrogen runoff from plots with surface manure was 640 times higher than from plots where manure was instead injected, the results showed.

This suggests that surface manure is more prone to runoff events, because high amounts of pollutants are washed off in one go. That could be catastrophic for surrounding ecosystems, which may become stressed by this heavy influx. Especially in the case of estrogen, the effect of such a deluge would linger on in ways that are hard to redress. Plugging manure into the soil, however, gives the earth more time to absorb the manure, and slow the pollutant release.

So, why don’t farmers rush to adopt this simple method? One stumbling block is the high cost of equipment needed to efficiently inject manure into the soil, the researchers point out. But with further studies that examine the potential benefits of this simple technique, that cost could drop. There’s some urgency behind this, too. Agriculture has swiftly become one of the most polluting industries on earth. This method would give farmers a way to minimize at least one of its many threats to the planet.