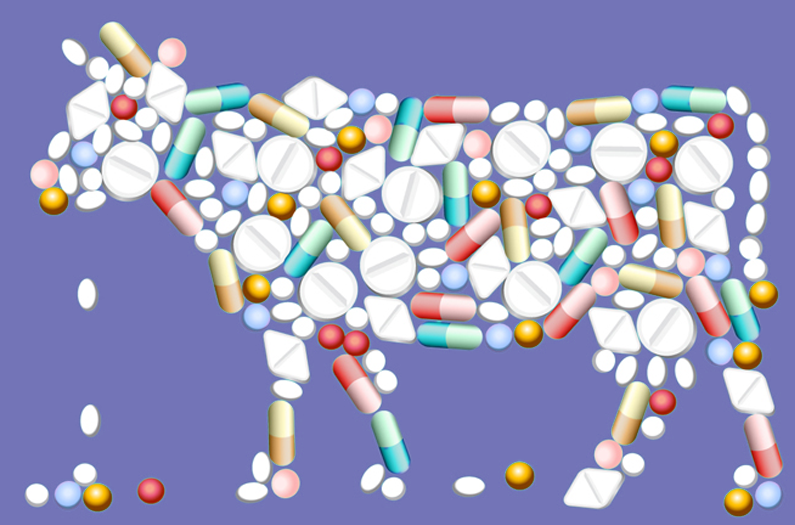 Scientists issue a manifesto for reducing drug use on farms

Researchers have mapped out how three global interventions--from regulation, to user fees, and reducing global meat intake--could reduce the ballooning problem of antimicrobial resistance on farms.
By Emma Bryce
October 6, 2017

If we take three key steps, by 2030 we could reduce the amount of antimicrobials applied to farm animals by up to 80%. So says a group of researchers who have challenged the status quo of livestock farming in a new Science paper.

2.  Limiting global meat consumption to just 40 g per day–about one burger per person–would slash antimicrobial use by 66%.

3.  Imposing a user fee of 50% on the current price of antimicrobials would cut use by 31%.

The problem with antimicrobials lies in their paradoxical nature: these medicines–intended to prevent disease outbreaks mostly on industrial livestock farms–are actually creating reservoirs of highly-adapted, disease-resistant bacteria, viruses, and parasites. If those spread beyond the farm they can pose a dire threat to human health. The problem is driven largely by overapplication: in some countries such as the United States, antimicrobials are used not just to slow the spread of disease, but also as animal growth promoters, and sometimes as a substitute for standard hygiene measures on farms.

The Science study, spearheaded by the Center for Disease Dynamics, Economics & Policy (CDDEP), wanted to explore whether the various interventions could substantially reduce the quantity of antimicrobials applied each year. The researchers used publicly-available country data on antimicrobial sales–and extrapolated where data wasn’t available–to show that in 2013, a total of 131,109 tons of antimicrobials were used in livestock animals. By 2030, this will expand to over 200,000, they estimated.

Then they modeled the impact of the three hypothetical global scenarios to arrive at their estimates. They also found that if we could apply all three interventions at the same time, we could achieve an 80% reduction in antimicrobials by 2030.

But ultimately, the researchers conclude that a blanket fee on antimicrobial use–despite generating the lowest reduction overall of 31%–is actually the surest route to improving livestock farming. Compared to changing people’s diets for instance, it’s also a more realistic task: in the United States alone, meat consumption hovers at 260 g per person per day, which could make the proposed drop to 40 g seem draconian. Imposing a fee would also generate revenue–up to $4.6 billion a year–for new research into better antimicrobial drugs.

The researchers know that the goals outlined in their paper are ambitious, precisely because of their global nature. And there are also risks. For instance, if countries choose to impose a levy on microbial use, smallscale livestock farmers might need support to help them afford these medical costs, they warn. But they also point out that encouragingly, methods to reduce antimicrobial use are already being trialled all over the world: the study hints at what’s possible if we continue on this path.

As CDDEP director Ramanan Laxminarayan notes, “We must act decisively and we must act now…to preserve antibiotic effectiveness.”