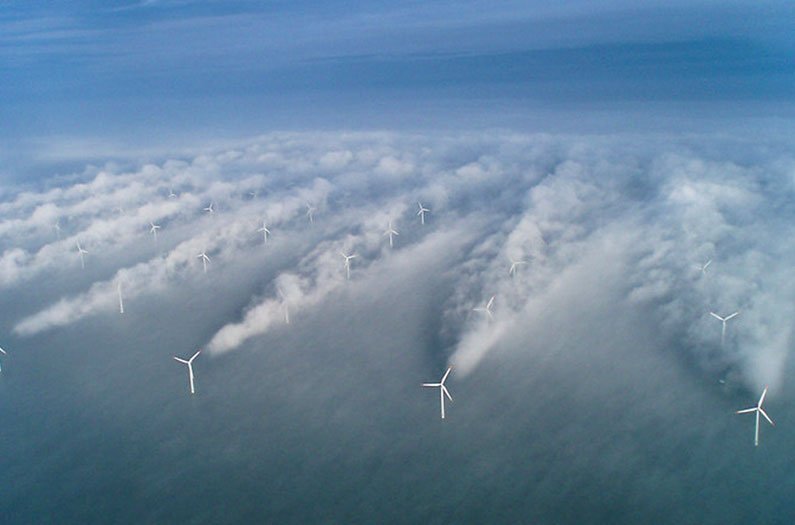 Wind farms in the open North Atlantic ocean could theoretically provide enough energy for all of civilization.
By Prachi Patel
October 19, 2017

New research shows the immense potential of ocean-based wind farms. Winds over the North Atlantic are strong enough that they could theoretically provide enough energy for all of civilization, according to a study published in Proceedings of the National Academy of Sciences. This would, of course, require covering vast ocean expanses with wind turbines.

Europe has some of the largest offshore wind installations in the world. The first offshore wind farm in the US, off the coast of Rhode Island, went online last year. But these farms are close to the coast. The wind energy potential of open oceans remains largely unexplored, Anna Possner and Ken Caldeira of the Carnegie Institution for Science write in their paper.

Floating wind farms in deep seas and oceans would not only be out of sight, they would be safer for birds and bats. Plus, winds blow much faster over open oceans than they do on the windiest spots on land, so turbines in the open ocean can generate at least three times as much power as they do on land.

On land-based wind farms, each turbine typically generates less power as the size of the farm increases or turbines are packed closer together. That’s because every turbine extracts some energy from wind, slowing it down. Large farms have to be carefully designed with turbines placed just so. Some studies have argued that large wind farms generate around 1.5 Watts per square meter.

On the open ocean, however, wind speeds are 70 percent higher than on land. Plus, cyclones and low-pressure systems bring down strong winds from the upper atmosphere to turbine hub-height to replenish the winds that turbines extract. So open-ocean turbines can capture three times more wind energy.

Recommended Reading:
More than half of rare species need intensive, hands-on help to ward off extinction

The researchers took these atmospheric conditions into account and used a computer model to compare the output of large wind farms in Kansas to theoretical farms out in the open ocean.

The North Atlantic ocean in particular is a wind treasure. Wind farms there could generate 6 Watts per square meter, the researchers calculated. The output would depend on season, the researchers calculate. In the fall and winter months, large-scale wind farms spread out over 3 million square kilometers could produce 18 terawatts of power, enough for the whole world. In the summer, there would less wind, but still enough to supply all of Europe’s electricity.

“While no commercial-scale deep water wind farms yet exist,” the researchers write, “our results suggest that such technologies, if they became technically and economically feasible, could potentially provide civilization-scale power.”