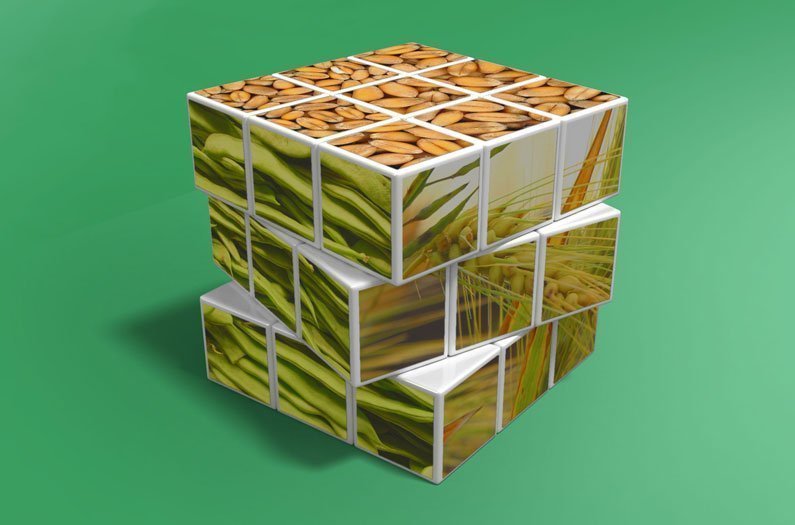 We’re producing less food--and using more water--than we should be. But researchers show that relocating crops across the globe could help us get closer to our full agricultural potential.
By Emma Bryce
November 10, 2017

If we strategically rearranged the location of crops across the planet—replacing underperforming crops with more resource-efficient and nutritious ones–we could feed 825 million more people, globally. So says a group of researchers writing in Nature Geoscience. This process would also decrease water use by up to 14%, they say.

Their proposal for revamping the food system is just one of many that experts have made in recent years, to tackle the task of feeding a burgeoning world population. Some have proposed that we usher in slick new technologies to improve farming efficiency. Others have suggested an increase in fertilizer and water use to boost crop yields. But while the first option is an impossibility for poor, smallscale farmers, the other relies on unsustainable water use and fertilizers that are already a major source of harmful greenhouse gas. That’s why the Columbia University-led researchers wanted to explore an option that both limits resource use, and boosts crop yields.

To do that, they focused on the world’s 14 major crops–including rice, wheat, sorghum, and soybeans–which collectively make up 72% of global food crop production. They identified the water use and productivity of those crops, and then modelled what distribution of crops across the planet would achieve optimal resource use and production.

The model revealed that by increasing the global spread of water-efficient crops like groundnuts, soybeans, sorghum, and others, we could reduce the use of rainfall and irrigation water, and produce more food. That was compared to foods like rice, millet, and wheat–crops that are dominant in many parts of the world, but which actually use more water and have a lower nutritional benefit, overall.

Changing the distribution of crops could reduce global rainfall consumption by 13.6%, and irrigation by 12.1%. Additionally, the shift to more nutritious foods would enable a 10% increase in calories and a 19% increase in protein globally, they found.

The impacts varied by country–which showed that redistributing crops isn’t a solution for every one. In the American Midwest, for instance, water scarcity would persist even if crops were swapped around. But, in 42 countries including water-stressed Australia, Morocco, and South Africa, there were huge benefits to be had: those countries could cut water use by 20% under the new agricultural regime. Another 63 countries, including Kenya, Iran, and Spain, could boost either calorie or protein production by up to 20%.

Additionally, crops like soybeans require less fertilizer, so if we farmed more of those, we could reduce the amount of greenhouse gas emissions entering the atmosphere. Water-efficient agriculture is also more resilient in the face of climate change, so food security would be enhanced by default.

Can we really carry out the large-scale relocation of crops across the globe? The answer will rely on finer-scale, regional studies that factor in variables like politics and cultural food preferences to help individual countries optimise crop production and water use. But for the time-being, this study provides a broad-brush view on the possibilities, highlighting hotspots of agricultural inefficiency across the planet. As lead author Kyle Davis sees it, it’s “one of several tools in making food systems more sustainable.”