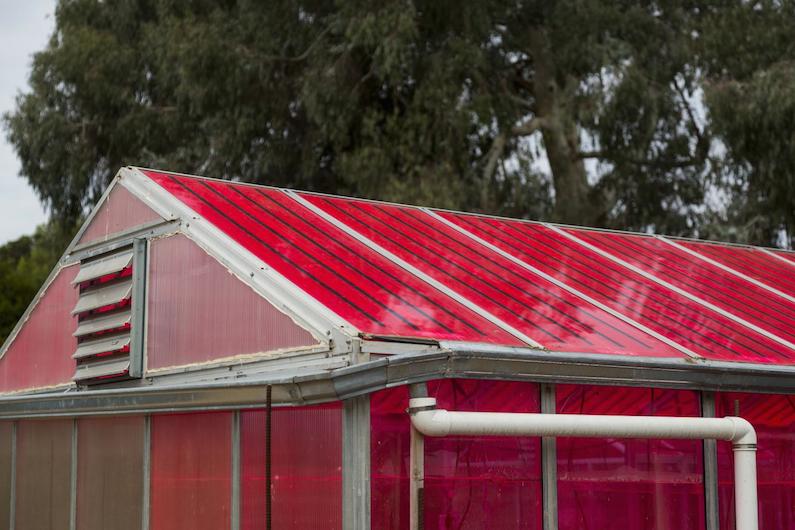 New Solar Greenhouse: A Greener Way to Grow Your Greens

A new greenhouse can grow food while also generating electricity. Its roof is made of dye-infused electricity-generating panels that let some light through and change its color so it boosts plant growth.
By Prachi Patel
November 16, 2017

A new greenhouse can grow food while also generating electricity. Putting regular solar panels on a greenhouse would block sunlight from reaching plants. But the roof of new greenhouse is made of dye-infused electricity-generating panels that let some light through and change its color so it boosts plant growth.

Tomatoes and cucumbers grow just as well in the smart structures as they do in conventional greenhouses, researchers from the University of California, Santa Cruz report in the journal Earth’s Future. And the panels produce enough electricity to power the greenhouse’s fans, climate-monitoring sensors, and data loggers.

In the past 20 years, the use of greenhouses to produce food has gone up six-fold. More than 9 million acres of land today is covered with the see-through structures. But they are energy hogs because they need fans, lights, sensors, and a constant temperature.

Reducing the amount of energy used by greenhouses has become a priority. Meanwhile, the use of silicon solar panels on farms around the world has been increasing.

The team led by professor of environmental studies Michael Loik came up with a novel way to integrate solar power production into a greenhouse. This would save land used for food production.

They embed plastic panels with a red dye that absorbs a lot of green and some blue light and sends them to thin black silicon solar cell strips that run down the panels. The rest of the light goes through, made redder by the dye. The red part of the light spectrum is best for plant photosynthesis.

The researchers tested the growth of 20 varieties of tomatoes, cucumbers, lemons, limes, peppers, strawberries and basil. Around 80 percent of the crops in the magenta greenhouses were unaffected by the redder lighting, and 20 percent of the crops grew better. The panels also cost about 40 percent less per watt than conventional silicon panels.

Read more:  What if we tracked a species recovery not just its extinction risk?

More work needs to be done to investigate the impact of such light-selective solar panels on crop and non-food plants. But, said Loik, “this technology has the potential to take greenhouses offline. We’re moving toward self-sustaining greenhouses.”