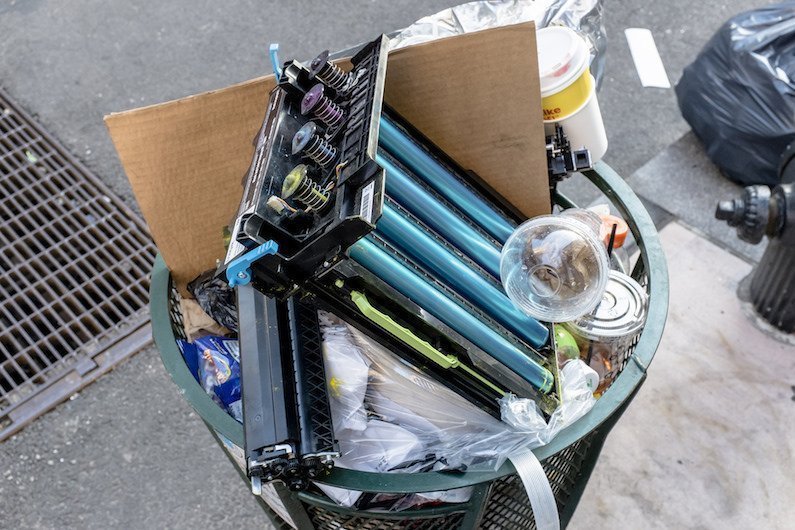 Researchers have now found a way to extract that residual toner and convert it into perfectly usable iron.
By Prachi Patel
November 23, 2017

An estimated 1.1 billion printer toner cartridges are sold each year around the world. More than 500 million of those end up in landfills. They can sit there degrading over hundreds of years, and leaching toxic chemicals from toner residue into the soil.

Researchers have now found a way to extract that residual toner powder and convert it into perfectly usable iron. The method should be relatively easy to translate to a bigger scale since it works at temperatures that are compatible with today’s industrial iron and steel-making processes. The study was published in ACS Sustainable Chemistry & Engineering.

A toner cartridge at the end of its life still contains about 8 percent by weight of toner powder. Scientists have made many attempts before to recycle and transform waste toner powder into useful products, including from colorants for rubber manufacturing and electrodes in lithium-ion batteries. An Australian company is also using it as an ingredient in asphalt for making roads.

“However, despite such developments, the amount of toner waste being generated and landfilled continues to increase,” materials researchers at Australia’s University of New South Wales write in the paper. So they wanted to come up with a new use for waste toner.

Waste toner powder is mainly composed of microscopic spherical particles. These particles have a core of iron oxide that is sheathed in a carbon-rich resin shell.

The researchers heat toner powder in a furnace at 1,550 degrees Celsius. This converts the iron oxide to a product that was 98 percent pure iron. The carbon in the polymer resins act as a reducing agent to take up electrons and facilitate the chemical conversion.

The process should provide an alternative and sustainable avenue for waste toner recycling, the researchers say.