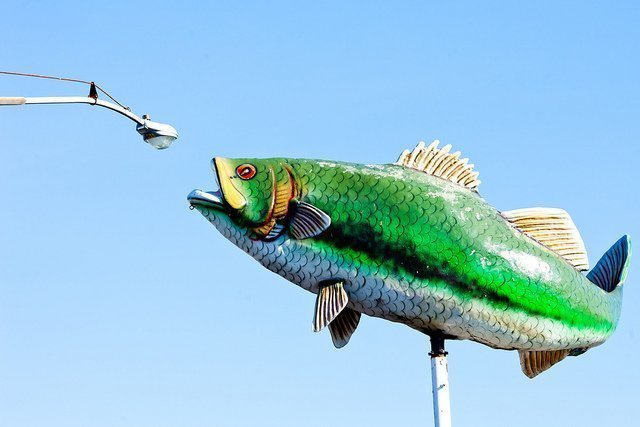 Living cheek by gill in modern cities is possible—but it isn’t easy
A new study strikes a hopeful chord by demonstrating the possibility of healthy fish populations in urban streams. But not all city waterways may have the necessary advantages.
By Sarah DeWeerdt
December 12, 2017

The population of Coastal Cutthroat Trout in a creek that runs through Portland, Oregon, has characteristics similar to populations of the fish in non-urbanized creeks, researchers report in the journal Urban Ecosystems. The study strikes a hopeful chord by demonstrating the possibility of healthy fish populations in urban streams. But not all city waterways may have the necessary advantages.

Fish in the salmon family, to which Coastal Cutthroat Trout belong, are often present in urban and suburban waterways in the Pacific Northwest region of the United States. Other city streams have lost their salmonids, but many people would like to bring them back.

Is it worth the effort? Pavement alters stream hydrology and results in toxic runoff. And urban streams often suffer from heat island effects and have physical barriers that block fish passage. Yet given rapid urban, suburban, and exurban development, if salmonids are to survive they may have no other choice but to live cheek by gill with humans.

In the new study, researchers studied Coastal Cutthroat Trout in Tryon Creek, a 7.81-kilometer tributary of the Willamette River that runs through southwest Portland. Just over half of the creek’s 17.9-square-kilometer watershed is developed land, which is concentrated in the headwater region.

The researchers surveyed the creek’s Coastal Cutthroat Trout population in 2008, 2009, 2011, 2013, and 2015. They weighed and measured fish, took tissue samples for genetic analysis, and implanted transponders to find out whether any of the fish migrated out of the watershed. They also examined a subset of fish for viruses, bacterial pathogens, and parasites in a wide array of body tissues.

Finally, they compared their results to data collected by other groups of researchers on 35 populations of Coastal Cutthroat Trout living in non-urban streams in Washington, Oregon, and northern California.

The fish in Tryon Creek have a few common parasites, but little evidence of disease, the researchers found. The population’s genetic diversity is similar to that of trout populations in Mt. Hood National Forest, although somewhat lower than those in the Lower Columbia River.

Their overall body condition, a measure of the relationship between length and weight, tends to be similar to that of fish in non-urban streams – it does vary from year to year, but that’s typical. Coastal Cutthroat Trout population density in Tryon Creek is also similar to what is seen in non-urban streams.

The fish in Tryon Creek come in all different sizes, a characteristic of healthy fish populations. About 70% of them are juveniles or small adults, which suggests that the population is consistently reproducing and young are successfully joining the population.

Some cutthroat trout remain in fresh water all their lives while others migrate out to sea and then return to their natal stream to spawn. Data from the transponders showed Tryon Creek contains both resident and migratory fish, which may give the population greater resilience in the face of urban development and climate change.

Overall, “Our results suggest that Tryon Creek can serve as an example of a healthy fish population in an urban watershed,” the researchers write.

That’s the good news. But Tryon Creek may not be a typical urban stream. Just over two and a half square kilometers in the lower watershed are protected in Tryon Creek State Natural Area. Farther upstream, the creek runs through a verdant city park. The creek has also been the focus of multiple conservation programs and habitat rehabilitation efforts in recent years.

Consider, also, an apartment complex located in the headwaters region of Tryon Creek that touts its proximity to the creek. Its address has a Walk Score of 68, reflecting an urban density that is probably too low to easily support low-carbon lifestyles, for example.

So yes, in principle, an urban stream can support a healthy fish population. But can we do what it takes to resolve the tension between their habitat and ours?