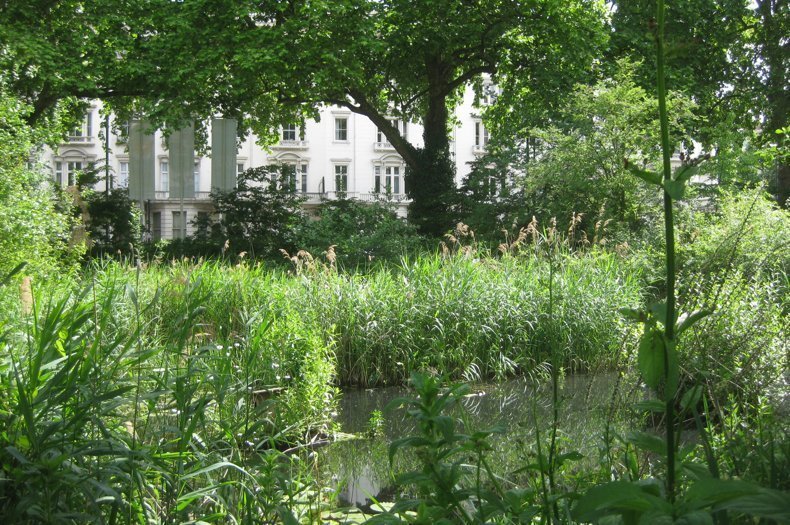 A New Tool for Planning Biodiversity in Small Spaces

Researchers say the London Natural History Museum’s controversial landscape redesign will actually increase the biodiversity on its grounds. While their findings likely won’t settle the debate, the methods — which applied landscape-scale tools to a very small setting — could be useful to urban designers everywhere.
By Brandon Keim
December 27, 2017

Behind London’s Natural History Museum is a tranquil spot treasured by the city’s nature-lovers: a one-acre wildlife garden in which some 2,600 species of plants and animals have been documented. It’s an oasis amidst the urban bustle, and when museum administrators announced in 2015 that the garden would be redeveloped in order to add a new entrance, public uproar followed.

More than 38,000 people signed a petition urging the museum to reconsider their plan, which would run a concrete path through the garden and replace its pond. The museum declined, countering that the total amount of natural area would be expanded. And in a study published in PeerJ, researchers from the museum say the new grounds should contain more life than before. “The proposed plans,” they write, “are estimated to result in a net gain in average biodiversity.”

Led by Natural History Museum biologist Helen Phillips, the study likely won’t change critics’ minds. After all, the controversy isn’t just about maximizing biodiversity, but regard for the intrinsic value of what’s already living there. Yet the findings may have ramifications beyond the museum’s grounds: they’re based on a novel approach that applies biodiversity-modeling methods typically used at landscape scales to a very small area.

“The ability to predict biodiversity loss or gain as a result of land use change within urban settings is important. Most models that link biodiversity and land use are at too coarse a scale for informing decisions,” write Phillips and colleagues. “We show how methods used in global models can be applied to smaller spatial scales to inform urban planning.”

The researchers combed through previous studies of plant and invertebrate biodiversity in each of the 19 types of habitat — including chalk grassland and hedgerow, broadleaved woodland and fens — contained in the redevelopment proposal, and extrapolated from those to a total biodiversity score for the plan. At least for plants and invertebrates, biodiversity should increase between 11 and 14 percent.

The researchers’ model isn’t complete. Vertebrates were not part of it; assumptions about relationships between diversity and habitat size have yet to be tested, and long-term post-development species counts are needed to know whether the model works. As aforementioned, aggregate biodiversity impacts are not the only way of thinking about outcomes. If the model holds true, though, there are certainly a great many less-controversial places where such tools could be used: commercial and public areas now managed for turf grass and ornamental shrubs, or any development where people want to maximize the life supported in a designed landscape.

“Urban green areas face many threats worldwide,” write Phillips and colleagues. “Without robust methods for estimating the consequences for biodiversity, planning decisions run the risk of being uninformed or misinformed.”