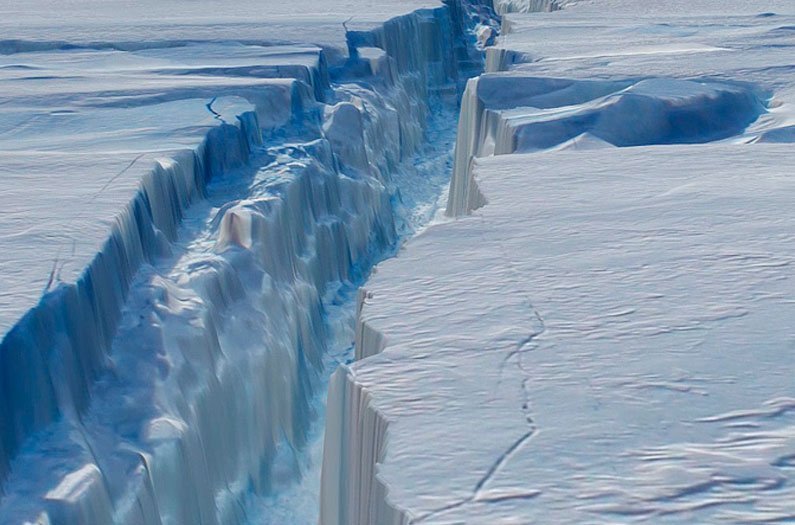 Climate-denial blogs purport to be based on science, but in reality their content has little overlap with statements in the peer-reviewed literature, an international team of researchers reports in the journal BioScience.
By Sarah DeWeerdt
December 5, 2017

Climate-denial blogs purport to be based on science, but in reality their content has little overlap with statements in the peer-reviewed literature, an international team of researchers reports in the journal BioScience.

Instead, these blogs build credibility with readers by appealing to each other’s authority, creating an echo chamber of interlinked sources.

The researchers looked at blogs because they have become important sources of information in the societal conversation about climate change and its consequences. Studies have shown that some people trust blogs more than they trust journalistic outlets or other traditional information sources.

They zeroed in on blogs’ coverage of Arctic sea ice and polar bears. While there are many different lines of evidence about climate change, climate denialists tend to selectively attack a small number of these, creating what the researchers refer to as “keystone dominoes” to knock down the whole of climate science by association. Changes in the seasonal extent of Arctic sea ice and the conservation status of polar bears are two such topics.

The researchers analyzed statements about sea ice and polar bears in 90 different climate-related blogs that covered both topics. Half of the blogs were science-based blogs and half were climate-denial blogs, categories that were obvious from the blogs’ own descriptions. They also analyzed the content of 92 peer-reviewed papers on polar bears and sea ice.

There’s little middle ground when it comes to Internet discussions of climate change, the researchers found. A statistical technique called principal component analysis shows no overlap between the content of science-based and climate-denial blogs.

“We found a major gap between the facts from scientific literature and the science-based blogs on the one hand, and the opinions aired in climate-change denying blogs on the other,” says Jeff Harvey, a researcher at the Netherlands Institute of Ecology and the study’s lead author.

The statements on science-based blogs overlap neatly with those in the peer-reviewed papers, the analysis showed. That’s not so surprising, since the science-based blogs often refer to scientific literature to support their case that climate change is shrinking Arctic sea-ice and threatening the survival of polar bears in the medium to long term.

But the content of the climate-denial blogs overlaps little with that of the peer-reviewed literature. Instead, “Approximately 80% of the denier blogs cited here referred to one particular denier blog, Polar Bear Science, by Susan Crockford, as their primary source of discussion and debate on the status of polar bears,” the researchers write. Crockford has not conducted scientific research or published in the peer-reviewed literature on polar bears. She publishes through a conservative think tank called the Global Warming Policy Foundation.

The researchers say that Crockford and other climate-denial bloggers tend to present scientific results out of context and spin them in a way that casts doubt on climate change and its consequences. For example, they might note that Arctic sea ice has gone through cycles of increasing and decreasing extent due to natural variations in the past, without acknowledging that according to those natural cycles, Arctic sea ice ought to be expanding right now.

“It’s time for scientists to counter the misinformation and engage directly with the public far more,” says Harvey. He and the other researchers argue that scientists should foster correct understanding of climate science by doing more media outreach, facilitating citizen science, and using social media.

More engagement between scientists and the public sounds great, and let’s have even more delightful scientists on social media.

But for many people who reject the evidence of climate change, their position may be based more on political identity than on academic rigor. Would it make a difference to readers of climate-denial blogs if they found out those sources aren’t really based on science? This journalist is not so sure.