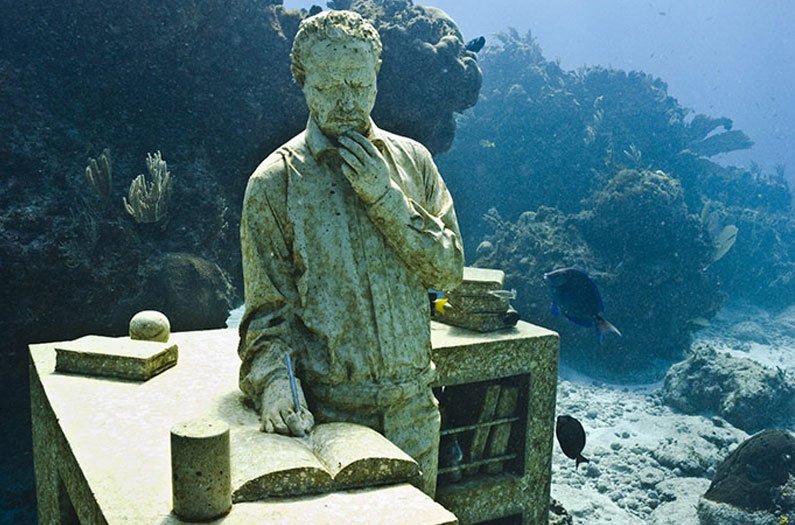 New calculations suggest that sea-level rise will be a lot worse than past studies have estimated, especially in high- and moderate-emissions scenarios. The difference is due largely to loss of Antarctic ice sheets.
By Sarah DeWeerdt
December 19, 2017

A new study that combines an established method for predicting sea-level rise with recent insights about Antarctic ice-sheet dynamics suggests that breakup of these ice sheets in a warming world will lead to greater sea-level rise than previously predicted. But we won’t have a good idea of just how much the waters will rise for another few decades.

Past efforts to predict sea-level rise assumed that the loss of Antarctic ice sheets would happen in a relatively smooth, linear fashion. But research published last year suggests that this isn’t always the case: broad swathes of ice sheet can disappear quite rapidly. Warmer ocean water below and meltwater trickling into crevasses from above can break up the floating ice shelves at the edges of the ice sheet, a process called hydrofracturing. This exposes massive ice cliffs that are prone to collapse, accelerating the breakup of the ice.

“The ice shelves are the key,” says study team member Robert DeConto, a climatologist at the University of Massachusetts in Amherst. “They hold back the flow of Antarctic ice toward the ocean, so we don’t want to lose them. The problem is, they don’t last very long when they are sitting in warm water or if they are covered with summer meltwater, so keeping global temperatures in check is critical.”

The new study, which appeared last week in the journal Earth’s Future, folds these insights about hydrofracturing and ice-cliff instability into an established model of sea level rise. The researchers, led by Robert Kopp of Rutgers University, calculated how the retreat of Antarctic ice sheets might affect global sea level rise through the year 2300 given different levels of carbon emissions.

Their calculations suggest that sea-level rise will be a lot worse than past studies have estimated, especially in high- and moderate-emissions scenarios. The difference is due largely to loss of Antarctic ice sheets.

Global average sea level could rise over two meters by the year 2100 with continued high carbon emissions, and over a meter and a half with moderate emissions, the researchers found. Median sea-level rise predictions using the new methodology tend to correspond to the extreme worst-case scenarios found in a well-respected previous analysis.

But keeping carbon emissions in check could prevent catastrophic breakup of Antarctic ice sheets from inundating the rest of the planet. The new study’s estimates of sea-level rise under a low-emissions scenario are similar to those of past analyses. That’s great news, because it suggests that climate change mitigation – that is, reining in carbon emissions – could be even more beneficial than previously thought.

But the picture is not so rosy when it comes to climate change adaptation – that is, efforts to change where and how we live based on our expectations about future climate and sea level. That’s because in the new model, the effects of Antarctic ice sheet loss don’t really kick in until after 2050.

“There’s a lot of ambiguity in post-2050 projections of sea-level rise and we may have to live with that for a while,” says Kopp. “We could end up with 8 feet of sea level-rise in 2100, but we’re not likely to have clear evidence for that by 2050.”

The new study was published last week, coincidentally on the 730th anniversary of St. Lucia’s flood, a storm surge that killed up to 80,000 people in northern Germany and the Netherlands in 1287. The flood, among the 10 deadliest in recorded history, must have been terrifying in its suddenness. It’s tempting from our modern perspective to comfort ourselves with the thought that at least we tend to have warning of such events and can get out of harm’s way.

But the new study suggests that we may not have such warning when it comes to sea-level rise. A few decades is close to instantaneous from the perspective of human infrastructure: By the time we know how many feet of water are coming, there may not be time enough for us to adapt.

The researchers suggest what Kopp terms a “flexible approach” to sea-level rise: “building for the half foot to 1.3 feet of sea-level rise that are likely by 2050, while plotting out options that will depend on what we learn in the next few decades and how sea level rises beyond that.” That’s an eminently sensible approach. The trouble is, so far we humans have shown ourselves to be terrible at this sort of thinking.