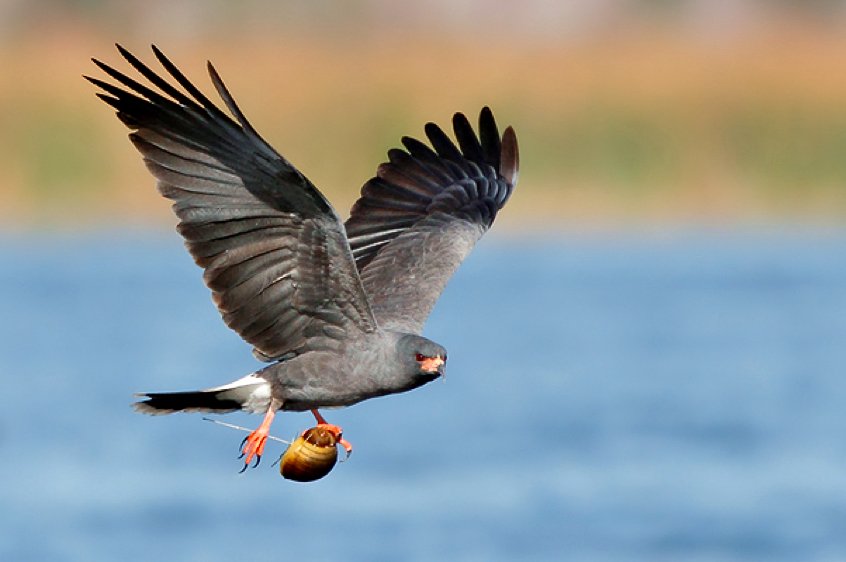 With invasives on the menu, an endangered bird thrives

In the Florida Everglades lives the northernmost population of snail kites, a slender tropical raptor who until recently fed exclusively on aquatic apple snails. As farmers and municipalities diverted water from that vast wetland, the snails’ numbers collapsed; so did snail kites, and by the early years of the 21st century, just a few hundred survived.

Around that time, the first island apple snails appeared in Florida. Originally native to South America and likely released from aquariums, they’re closely related to apple snails — Pomacea maculata to Pomacea paludosa — but physically much larger: compared to the golf ball-sized natives, the newcomers can swell to baseball dimensions. They proliferated rapidly, worrying conservationists who feared that P. maculata would destroy vegetation and outcompete natives. Snail kites, with bills adapted for eating smaller P. paludosa, were expected to starve.

That’s not what happened. In little more than a decade, snail kites have adapted. “Snail kites appear to be growing large with disproportionately large bills,” report researchers led by Robert Fletcher, an ecologist at the University of Florida, in the journal Nature Ecology & Evolution. “Population growth rates of snail kites have increased since the invasion of P. maculata.” More than 2,000 of the imperiled birds now thrive on this new diet.

Fletcher and colleagues say the birds’ bodies and beaks are about 10 percent larger now than when the invasion began, allowing them to better carry the invasive snails and pry into their shells. “Such a rapid response from a long-lived native predator is remarkable,” they write, given that evolution typically progresses slowly and incrementally, and just two generations have passed since the invasion’s beginning.

Instead of natural selection favoring a few genetically fortunate individuals, though, snail kites have benefited from what’s known as phenotypic plasticity: the capacity of individuals to respond to environmental changes. It’s phenotypic plasticity that allowed dramatic nutrition-enabled increases in affluent human populations during the 20th century. In the case of snail kites, it underscores the potential of long-lived vertebrates to adapt to invasives — an ability that “remains mostly unknown,” writes Fletcher’s team, and holds promise for other species.

The findings fit into an ongoing controversy over the nature of invasions. To many conservationists, they’re a scourge responsible for extirpations and extinctions. Others consider the threat exaggerated: they argue that invasives are often a symptom rather than a straightforward cause of biodiversity collapse, can actually enrich ecosystems by restoring lost ecological processes or adding new threads to food webs.

It’s a debate that won’t be settled by any one study — but in Florida’s Everglades, at least, invasive snails are a boon for an endangered, unexpectedly adaptable bird.