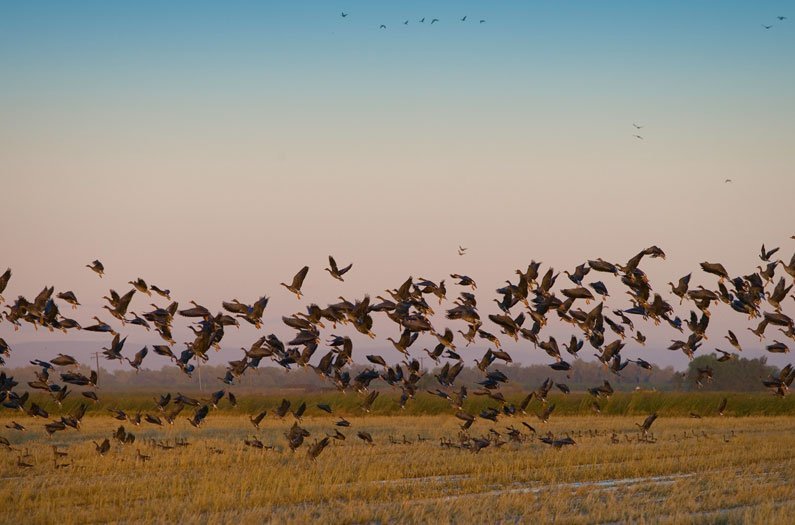 Between the late 18th and late 20th century, people drained more than 90% of California’s Central Valley wetlands. It’s now among the world’s most productive agricultural areas — but for shorebirds, their populations in precipitous decline, it’s practically a desert. Now an innovative program is helping rice farmers turn their fields into seasonal wetlands.
By Brandon Keim
January 10, 2018

For thousands of years the inland lowlands of California were a vast chain of wetlands where migatory waterfowl lingered each spring and fall, taking sustenance on their extraordinary inter-hemispheric journeys. Settlement changed all that: between the late 18th and late 20th century, people drained more than 90% of those wetlands. The Central Valley is now among the world’s most productive agricultural areas — but for shorebirds, their populations in precipitous decline, it’s practically a desert.

It might be possible, though, for shorebirds and farmers to coexist. Writing in the journal Ecological Applications, researchers led by ecologist Greg Golet of the Nature Conservancy describe an innovative program that pays Central Valley rice farmers to manage their fields as temporary wetlands during migration. “Migratory species face great challenges due to climate change, conversion of historical stopover sites, and other factors,” they write, “but dynamic conservation programs offer promise that, at least in certain instances, their needs can still be met.”

Called BirdReturns, it’s not the first pay-for-nature scheme — perhaps the best-known is the Conservation Reserve Program, which reimburses U.S. farmers for removing land from production — but adds 21st-century sophistication: data gathered by bird-watchers helps identify precisely where migrating birds most need habitat, which the Nature Conservancy then rents from rice farmers who leave fields flooded when they’d typically be drained.

Golet’s study, based on satellite monitoring of 830 square miles of Central Valley fields in 2014 and 2015, describes the results. “Treatment fields had significantly greater shorebird density, richness and diversity than control fields in both spring and fall,” write the researchers. These fields “yielded the largest average shorebird densities ever reported for agriculture in the region.” In the desert, an oasis.

Despite their popularity among shorebirds, though, temporarily-flooded rice fields might seem a poor substitute for permanently protected wetlands. Yet Golet pointed to research on the biodiversity of flooded fields, which are rich with invertebrates and leftover grains. “While I would not suggest that they’re equal to natural wetlands,” he says, “it’s not a stretch to say they serve as valuable surrogates.”

With habitat in short supply and droughts becoming more common, Golet’s team says these surrogates will become increasingly important. It’s also less expensive to rent the fields: another Nature Conservancy paper estimates the costs as a small fraction of purchasing them. “Making shorter-term investments may in some cases be more feasible and effective,” says Golet. He notes that there are just 75,000 acres of managed wetlands in the Central Valley but more than 500,000 acres in rice production. “In rice there is so much room for improvement,” Golet says, “and the magnitude of change is really massive.”