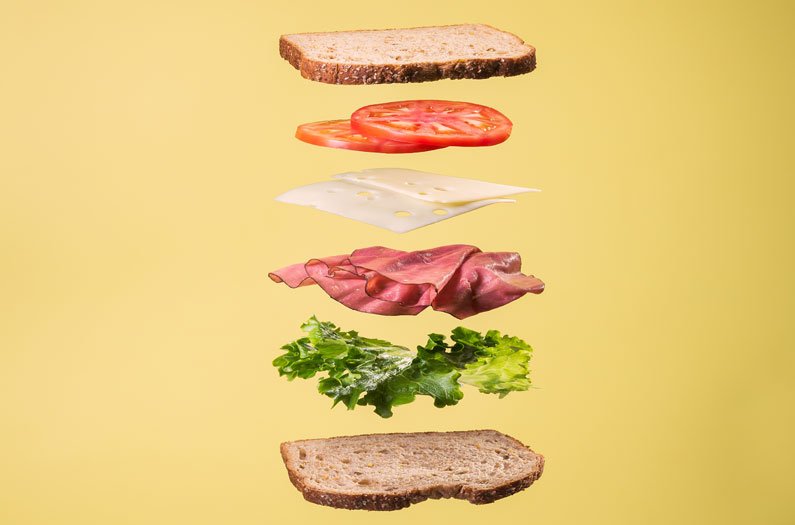 Deconstructing the environmental footprint of a sandwich

The sandwich is ubiquitous, and it has a far bigger environmental footprint than you might expect. But improving the way we make them could stop several million tons of CO2 from getting into the atmosphere.
By Emma Bryce
February 2, 2018

If we did a sustainability makeover on one of our most ubiquitous lunch items–the sandwich–we could stop several million tons of greenhouse gas emissions from entering the atmosphere each year, a new study has found.

It may seem laughable that the unassuming sandwich is a climate change culprit. But nowadays, when everything we produce and consume is subject to scrutiny, the researchers–writing in Sustainable Production and Consumption–argue that we’ve overlooked the omnipresent sandwich for too long. In the United Kingdom alone, a nation particularly devoted to this lunchtime staple, and where the researchers carried out their study, Britons consume an estimated 11.5 billion a year.

To estimate the environmental footprint of all that produce, the researchers split British sandwiches into two groups: shop-bought, and homemade. They considered 40 different sandwich recipes, and carried out a lifecycle analysis to estimate the emissions impact of each one. That took into account the resources used during agricultural production of sandwich ingredients, in the packaging materials, the transport to shops, storage, and disposal of leftover packaging and food.

The analysis revealed first of all that shop-bought sandwiches were twice as impactful as sandwiches prepared at home. That’s because their production–including transport, processing, and storage–is far more resource-intensive. Each shop sandwich also requires about 20% more ingredients to produce, the researchers estimate, because of food losses that occur along the supply chain.

Of the 40 sandwich types, the meatiest ones were the worst environmental offenders. Generally, shop sandwiches that incorporated meat, cheese, and prawns each contribute the equivalent of at least 1,200 grams of carbon dioxide into the atmosphere. One popular shop-bought variety containing bacon, sausage, and egg accounted for 1,441 grams of CO2e (equivalent). By comparison, a homemade ham-and-cheese sandwich produced just 843g CO2e, despite the ham: clearly, assembling a sandwich at home can drastically save on resources.

Read:  How much land is needed to stop the biodiversity crisis?

These values may seem insignificant at the level of a single sandwich. But if just one person consumes five shop-bought sandwiches a week, each at 1,200 g CO2e, over a year that would generate the equivalent of 312 kilograms of CO2. That’s the same quantity that a car produces on a 12-hour drive. Roughly extrapolated to the 11 billion sandwiches consumed every year in the UK (half of which are shop-bought, and half homemade), that amounts to 11.8 million metric tons of CO2 entering the atmosphere annually.

A lot of this would inevitably be decided by consumer preferences: buyers may not necessarily want a less meaty sandwich, for instance. Therein lies the rub–but also the opportunity, because consumers can be powerful vectors of change, the researchers argue.

And, now we know that the humble homemade sandwich is itself a solution–easier on the wallet, and the environment.