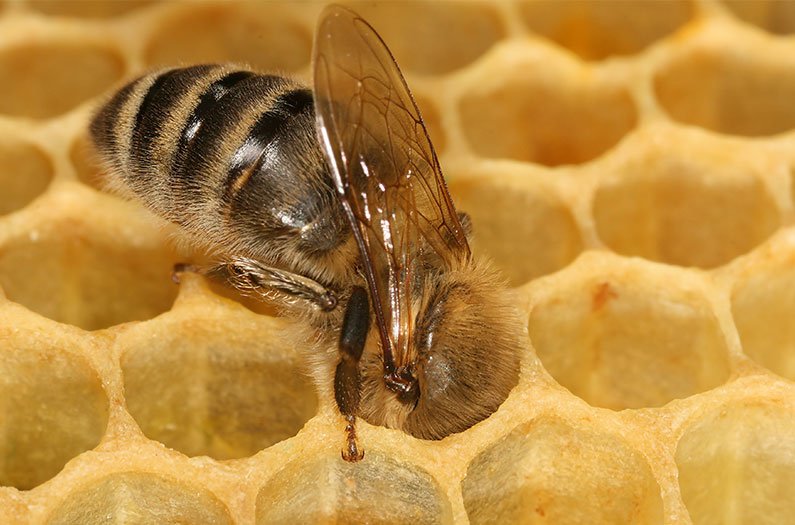 How many bee species does it take to pollinate a farm? Far more than you think.

It's not all about the honeybees: at large scales, crops require tens of native, wild bee species to flourish and sustain our food systems.
By Emma Bryce
February 23, 2018

Our food supply depends on huge squadrons of native wild bees, a new study finds. In fact the research, published in Science, shows that large farming landscapes require roughly 80 bee species to properly maintain crops. There’s a larger value to these findings: while many studies have shown the importance of biodiversity in small-scale, controlled experiments, this one reveals its true impact in nature.

We already know that bees provide a vital ecosystem service, by pollinating about 75% of Earth’s crop species. But increasingly, we’re relying on managed populations of honey bees to do that job. This overlooks the native, wild species that also play a role.

To find out how crucial these species are, the researchers started by selecting 48 commercial watermelon, blueberry, and cranberry farms in the United States. At demarcated areas within each site they collected pollinators to sample the variety that visited each farm. Then they estimated how much pollination the different bee species carried out, by counting the number of pollen grains deposited by each type on experimental flowers. By combining that information, they could examine the minimum number of species required to reach particular thresholds of pollination–either 25%, 50%, or 75%.

To get to a 50% pollination threshold on a single farm plot, only 5.5 species would be required. But, that changed dramatically as the researchers scaled up across the landscape. Across the whole area, getting to 50% in fact depended on 55 active pollinator species. Bumped up to 75%, the large swathe of farmland needed 79 bee species to constantly be doing their rounds. “As area increases, most species are found to be important,” the researchers say.

This goes against a long-held assumption that we can rely on a few dominant bee species to do most of the pollination–hence our affection for the honey bee. While there are usually dominant species in all ecosystems, the researchers found that without the full variety of bees, we simply wouldn’t get the required amount of pollination for our crops.

Our dependence on the honey bee, therefore, poses a problem–especially considering the multitude of threats they face from disease, pesticides, and climate change. Knowing what we do now about the immense wealth of bee species that frequent farms, the researchers suggest that farmers do more to invite them in–by diversifying crops, reducing pesticide use, and planting flowering strips and hedgerows that provide good habitat.

This study also sheds some light on a longstanding and controversial debate between conservationists, about whether biodiversity truly is as crucial to Earth’s ecosystems as believed.

Because most biodiversity studies have taken place at small scales and in artificially controlled conditions, it’s been difficult to prove, for sure, that its importance is mirrored in nature. But with its real-world, large scale experiment, this research goes some way to proving that species richness is indeed a prerequisite for ecosystem health. “Our results confirm the importance of biodiversity in keeping the planet habitable for human beings, at least if our findings apply to other ecosystem functions as well,” the authors write.