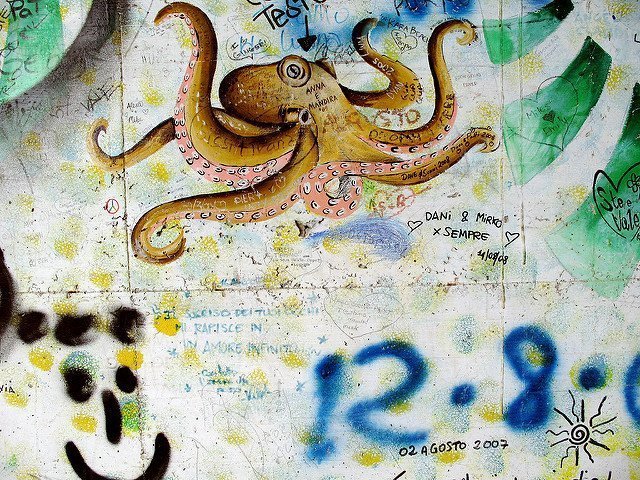 Gimme shelter, says your new neighbor, the urban octopus
City life may suit the world’s largest octopus species, according to a new study that uggests that the sea, too, has its synanthropes – wild species that live in, and even benefit from, human-dominated landscapes.
By Sarah DeWeerdt
March 13, 2018

City life may suit the world’s largest octopus species, according to a new study from researchers in Seattle. The study is a rare look at how urbanization affects marine organisms. It suggests that the sea, too, has its synanthropes – wild species that live in, and even benefit from, human-dominated landscapes.

The nascent discipline of urban ecology has rarely ventured beneath the waves. But most of the world’s human population lives along coastlines and population growth is fastest there, so it stands to reason that urbanization has a big impact on coastal marine environments. The population of the Puget Sound region where the new study took place, for example, has increased six-fold over the past century, and four million people now live within 20 kilometers of its shoreline.

In the study, published 24 February in the journal Urban Ecosystems, researchers analyzed data on octopus sightings by recreational divers gathered as part of a citizen-science project. The divers saw giant Pacific octopus (Enteroctopus dofleini) on 2,158 of 5,790 dives throughout Puget Sound between 2000 and 2016.

Many species that thrive in cities also depend on abundant food resources associated with the presence of humans, either our leftovers or our pests. But this doesn’t seem to be the case with the giant Pacific octopus. The researchers collected middens – piles of discarded shells octopuses leave outside their dens after consuming prey – from 24 different sites around Puget Sound. Octopus diets are similar in urban and rural areas, they found, dominated by the same half-dozen species of clams and crabs throughout the study area.

The relationship between the giant Pacific octopus and cities is likely to be a complex one. The researchers found that in shallow waters, the animals are less common in urban areas than in rural ones. This could be because shallow urban waters are too warm or too brackish for the species’ liking. Or, the octopus may face increased predation pressure from seals and sea lions, which themselves benefit from urban landscapes in some ways, using docks and other human-built structures as haul-out sites.

For now, that’s speculation. The researchers caution that their data about increased octopus abundance in urban deep waters are also preliminary. We know so little about urban marine ecosystems that it’s hard to sort through different hypotheses about what drives these patterns. Plus, octopuses are difficult to study – you can’t tag them, for example – so answering these questions will be tricky.

Still, octopuses have a lot in common with other species that are known to thrive in cities – not only can they use human-made structures for shelter, but they’re highly adaptable and good at problem solving. So maybe we’re justified in adding to our list of neighbors, next to the raccoon at the sliding glass patio door and the coyote in the halo of the street lamp, the octopus casting its appraising eye from under the sunken hull of a rowboat.