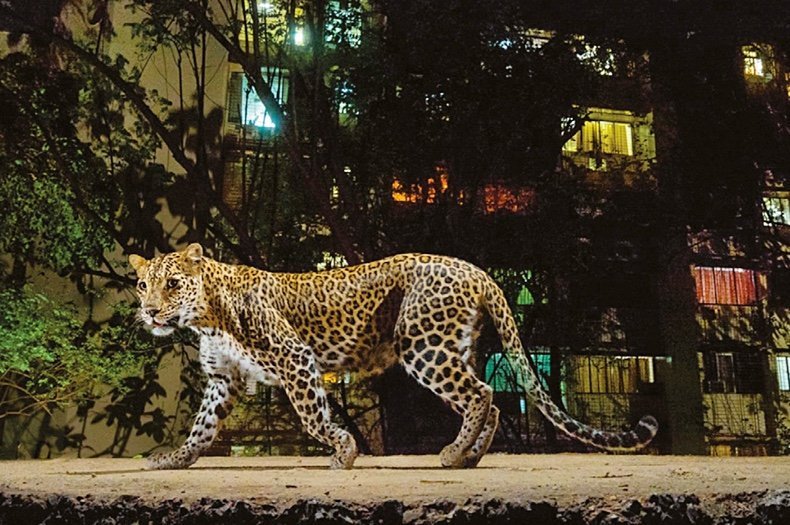 How leopards in Mumbai may save human lives
It’s often not easy to live beside big predators. People have an instinctive and very understandable wariness of large, meating-eating wild animals, and they’re perceived through a lens tinted by centuries of fear and persecution. Yet we might accept these animals as neighbors, or at least appreciate when their ecological effects coincide with our own goals — such as preventing rabies in the Indian city of Mumbai.
By Brandon Keim
March 21, 2018

It’s often not easy to live beside big predators. People have an instinctive and very understandable wariness of large, meating-eating wild animals, and they’re perceived through a lens tinted by centuries of fear and persecution. Yet we might accept these animals as neighbors, or at least appreciate when their ecological effects coincide with our own goals — such as preventing rabies in the Indian city of Mumbai.

In a study published in Trends in Ecology and the Environment, biologists led by Alexander Braczkowski of the University of Queensland describe the unappreciated public-health benefits of leopards living in Mumbai’s Sanjay Gandhi National Park. There, in 40 square miles of natural lushness abutting a city of 22 million people, several dozen of the big cats persist. They eat pigs, deer, and also a great many free-roaming dogs.

Dogs account for about 40 percent of the leopards’ diets — a fact that many dog-loving people may find distressing, including many residents of Mumbai. The city’s estimated 100,000 community dogs, to use a term less loaded than ‘feral’ or ‘stray,’ are often treated as canine members of the neighborhood. But they often cause problems, too, biting an estimated 74,000 people every year and frequently transmitting rabies, which is endemic to the dogs.

Along the neighborhoods lining Sanjay Gandhi National Park, though, where leopards hunt at night, dogs are found at far lower population densities than elsewhere in the city. Braczkowski and colleagues calculated what this means for dog bites: with about 350,000 people living in the area, the leopard-induced dog reduction could translate to as many as 1,000 fewer dog bites and 90 fewer deaths from rabies each year.

To be sure, that’s a very high-end estimate. The researchers assume that dog populations without leopards would reach extreme population densities found in only a few places elsewhere in Mumbai. And as 18 people died from rabies in the entire city between 2013 and 2016, the figure of 90 deaths possibly prevented seems high.

Discover more:  Humans' construction footprint in the ocean quantified for the first time

Still, the study points to a role for leopards in reducing a deadly disease. And while public sentiment, which fell outside the study’s scope, could prove mixed — many Mumbai residents carry sticks to fend off dogs, while others feed and care for them — the findings certainly add a new line to the equation by which people there manage the animals who live among them.

“Whereas the negative effects of carnivores have been well documented,” write the researchers, “the benefits provided by carnivores to human well-being and ecosystem services have not.” And though people may still worry about being next on the leopards’ menu, that fear needs to be “weighed against the potentially much greater number of lives saved, among other benefits, by the presence of these carnivores.”

Image: University of Queensland / Trends in Ecology and the Environment