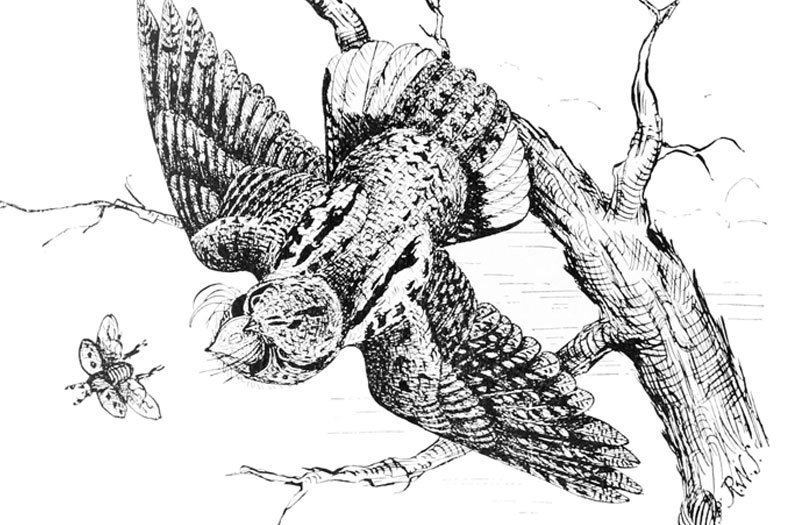 By contrasting museum specimens with living whip-poor-wills, researchers could extrapolate how the birds used to eat. Their troubling finding: there seems to be a lot fewer big bugs than there used to be.
By Brandon Keim
March 14, 2018

No guild of North American birds is declining so rapidly as aerial insectivores: acrobatic marvels whose maneuvers make our hearts soar, and who provide a vital ecosystem service. Why are their numbers plummeting? A leading explanation is a widespread decline in insect populations — a troubling possibility, hinted at by many studies but also one difficult to pin down. There are few records of historical insect numbers against which to compare our own.

In a study published in the journal Frontiers in Ecology and Evolution, researchers led by biologist Philina English of Simon Fraser University describe their ingenious workaround: they used museum specimens of whip-poor-wills, a medium-sized insect-eater whose populations are falling by 3.5 percent each year, as biological time machines. By contrasting the chemical composition of their bodies with the composition of living whip-poor-wills, the researchers could extrapolate how the birds used to eat.

“These results are consistent with the hypothesis that aerial insectivore populations are declining due to changes in abundance of higher trophic-level prey,” wrote the researchers. To translate that into normal speak: the birds are suffering because there seems to be a lot fewer big bugs than there used to be.

If insect populations are indeed falling, surmised the researchers, it stands to reason that bugs higher up the food chain, who consume insects smaller than themselves, would be declining even faster. This would push whip-poor-wills, who prefer to eat larger, more nutrient-rich insects, to eat smaller and less-sustaining fare.

As it happens, smaller bugs and their insect predators accumulate subtly different forms of nitrogen in their tissues. The presence of these nitrogen signatures in bird bodies thus becomes a record of their own diet. When English and colleagues compared the chemistry of claw and feather samples from whip-poor-wills caught recently in Ontario to specimens collected for Ontario museums during the late 19th and 20th centuries, they found a “significant decline” in chemical traces of larger insects.

The pattern “is consistent with contemporary whip-poor-will populations feeding lower in the food web than in the past,” wrote the researchers. While English cautioned that more testing is necessary to be absolutely certain that something else wasn’t responsible for the chemical shift, the findings fit with other observations of insect decline.

An important next question is where the decline is happening: on southern wintering grounds, northern breeding grounds, or along migration routes? English noted the importance of the Gulf Coast, a crucial migratory stopover region. If insects are in short supply there, at a time when migrants need all the fuel they can get, it would be especially harmful.

In addition to where, another question is: why are insects in decline? Climate change and habitat loss are possible culprits. Collisions with automobiles are also an underappreciated problem, says English. And hovering over it all is the issue of pesticide pollution, and in particular neonicotinoids, the world’s most widely-used class of pesticides. Initially thought to be environmentally benign, they’ve been described accumulating in soil and water, where they’re toxic to insects and linked to insect-eating bird declines.

The implications of this are not restricted to whip-poor-wills. They are, wrote the researchers, a “case study.” The same may well be happening in other members of their guild, such as nighthawks and swifts and swallows. An entire way of being — and one that humans rely upon to control insects we consider pests — is threatened.

“Aside from admiring the beauty and grace of birds like swifts and swallows,” says English, “I genuinely fear a world where we are compelled to rely on controlling agricultural and disease-carrying pest insects exclusively through the use of chemicals and technology because too many of their natural predators have been effectively eliminated.” If people wait too long, the only aerial insectivores left might be in museums.

Source: English et al., “Stable Isotopes from Museum Specimens May Provide Evidence of Long-Term Change in the Trophic Ecology of a Migratory Aerial Insectivore.” Frontiers in Ecology and Evolution, 2018.