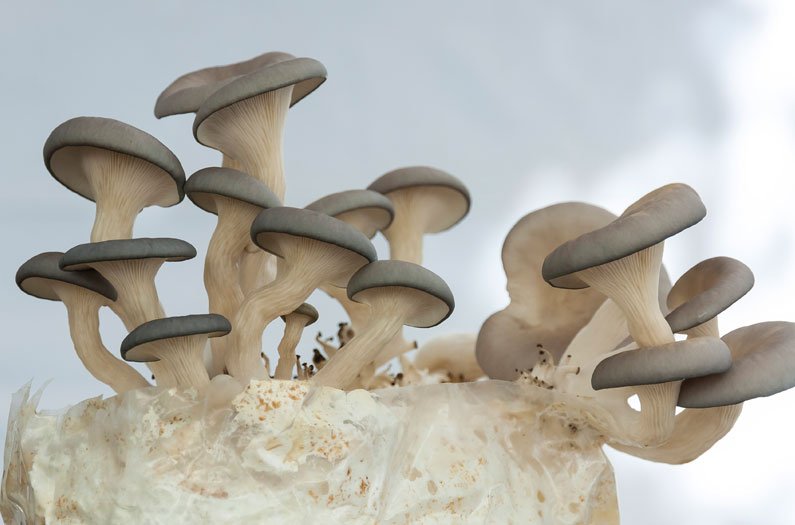 A bacteria in old mushroom-growing substrates can convert cellulose to biobutanol, a gasoline substitute. The discovery could lead to a simple, low-cost method to produce butanol from non-food plants and waste biomass.
By Prachi Patel
April 12, 2018

Mushrooms are a culinary delight. They could also provide a solution to sustainable biofuel production. Researchers have discovered a bacteria in old mushroom-growing substrates that converts cellulose to biobutanol.

Biobutanol is a liquid fuel that can directly replace gasoline in engines. The finding published in Science Advances could lead to a simple, low-cost method to produce butanol from non-food plants and waste biomass.

Biofuels are made today from corn and sugarcane. These crops compete with food farming. Plus making traditional biofuels is costly and takes a lot of energy and water.

Fuels made from cellulosic materials such as wood, grasses, and waste paper would be more sustainable. Cellulosic biomass is plentiful, it can grow on wastelands, and wouldn’t displace food crops. But researchers have yet to come up with a practical method to make cellulosic biofuels on a large scale.

The production of cellulosic butanol “has been hampered by the lack of potent microbes that are capable of converting cellulosic biomass into biofuels,” engineers at the National University of Singapore write in the new paper. Current production methods are costly and require complicated pre-treatment.

So the engineers’ discovery of a wild bacteria that ferments cellulose to produce butanol is a promising breakthrough. The team discovered the bacteria in 2015. They obtained two-year-old spent mushroom-growing substrates—a mix of wheat straw and saw dust—from a mushroom farm.

After culturing the bacteria in the compost, they separated and genetically analyzed different strains. They found a strain with novel genes that allow it to produce enzymes that can help convert cellulose to butanol. Adding microscopic crystals of cellulose to the bacteria culture produced butanol. There was no pre-treatment required.

The researchers now plan to genetically engineer the strain to boost its production of butanol.