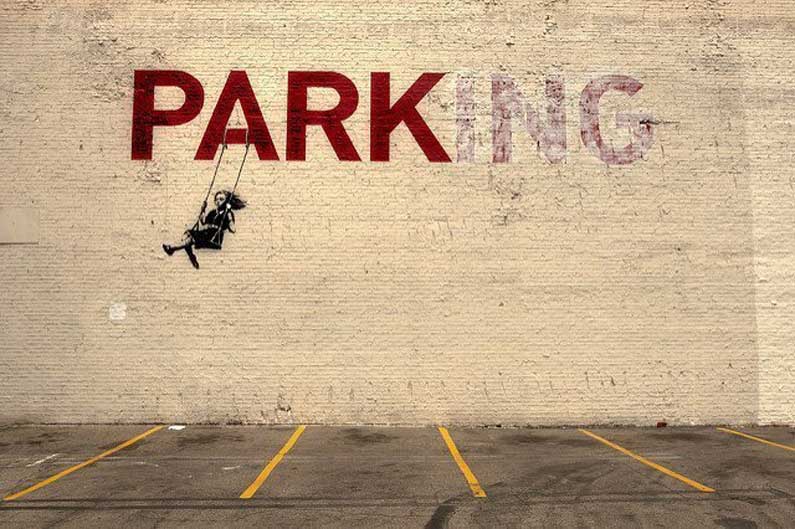 Widespread adoption of self-driving cars could reduce the amount of urban space devoted to parking lots. Using a computer model, researchers calculated that a self-driving car lot could accommodate 62% more cars on average than a conventional parking lot.
By Sarah DeWeerdt
April 10, 2018

Widespread adoption of self-driving cars could reduce the amount of urban space devoted to parking lots, researchers from the University of Toronto report in the journal Transportation Research Part B.

Parking spaces for self-driving cars can be smaller than those for than conventional cars because passengers can be dropped off before the car enters the lot, so cars can be parked without leaving space for doors to open. There’s no need for elevators and staircases to get people out of the lot, saving more space.

Rather than parking cars in two rows with lanes in between for cars to pass in and out, as in a conventional parking lot, a self-driving car lot can have grids of multiple rows with the cars packed in like sardines. To retrieve a car parked in the middle of a grid, the parking lot operator can direct other cars that are blocking it to move out of the way.

“There’s a trade-off,” lead author Mehdi Nourinejad, who worked on the new study as a PhD student in the Department of Civil Engineering, said in a press release. “If you have a very large grid, it leads to a lot of relocations, which means that it takes longer on average to retrieve your vehicle. On the other hand, if you have a number of smaller grids, it wastes a lot of space.”

The optimal layout of a parking lot depends on how many cars need to fit in the lot. A parking lot operator could use a conventional two-row configuration when parking demand is low, then switch to grids of four, six, or eight rows when demand increases, directing the cars to rearrange themselves in order to fit more vehicles in.

With less space needed for parking lots, the extra area freed up could be used for other purposes, like housing, shops, or parks. This is presented as a benefit of self-driving cars, the obvious implication being that parking lots are wasted space.

The problem is that the approach to parking lots outlined in the study works best when lots are only for self-driving cars. There would have to be a lot of self-driving cars on the road in order for this shift in urban infrastructure to make sense, the researchers acknowledge.

Of course, we could reduce the amount of urban space devoted to parking lots without waiting for self-driving car technology to mature. Instead, we could simply make it easier for people to get around cities by walking, biking, or public transit. Maybe an unintended result of the study is to point out how willing we are to let technology reshape our cities, while being unable to harness our values to do so.