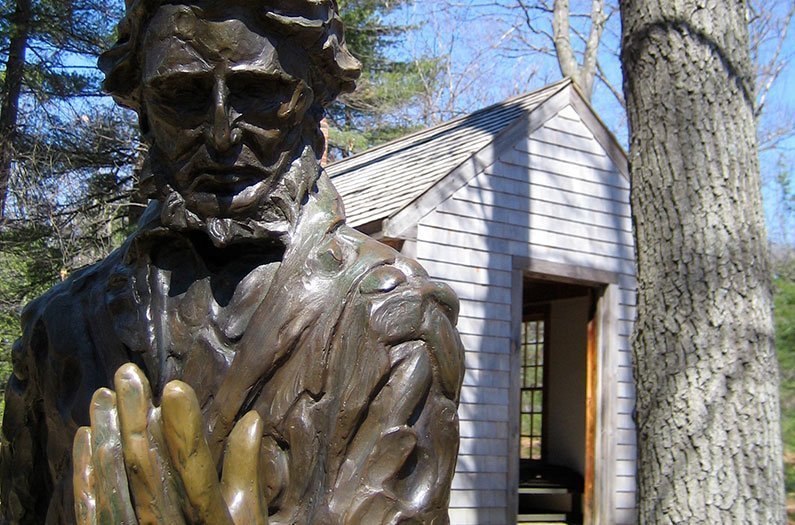 The Anthropocene is everywhere, even Walden Pond

Human activities have changed the ecology of Walden Pond, the iconic lake near Concord, Massachusetts that inspired Henry David Thoreau’s meditation on simple living and the natural world. “The lake ecosystem is now quite different from that described by Thoreau,” researchers led by J. Curt Stager of Paul Smith’s College in New York report in the journal PLoS ONE.

The researchers took six sediment cores from different locations in Walden Pond. They analyzed various chemical signatures and tracked changes in the community of single-celled algae called phytoplankton over the course of 1,800 years. Changes in the proportions of different kinds of phytoplankton enable researchers to make inferences about chemistry, water quality, and other aspects of the lake environment over time.

Walden Pond, the deepest natural lake in Massachusetts, sits in a depression left by retreating ice sheets. There is little evidence of human impact on the lake before Thoreau wrote Walden in the mid-1800s. But since then, its popularity as a place of both recreation and pilgrimage has degraded its ecological condition. We’ve essentially loved it to near-death, as we so often do.

In the early 20th Century a path was constructed to Thoreau’s cabin, and a bathhouse was built on the lakeshore. By the 1930s, hundreds of thousands of swimmers visited every summer. Later, Walden Pond was poisoned with pesticide, and stocked with non-native fish for anglers to catch.

The new analysis confirms previous sediment core studies that found changes in the phytoplankton community during the 20th Century. Two species of phytoplankton that indicate eutrophication, a process that results from excess nutrient input into the water, become highly abundant in upper layers of the cores, and another species that indicates healthy conditions virtually disappears.

An increase in single-celled algae that live in the water column relative to those that live on the bottom during the same time frame in the sediment cores reflects cloudy water, also a sign of eutrophication and ecosystem degradation.

Dark sediments in the upper layers of two cores indicate declining oxygen levels in the water. Meanwhile, a decline in the proportion of organic matter in some upper sediments probably reflects erosion associated with lakeshore development.

The sediment cores record not only local environmental events, but also broader changes related to human activities. Radioactive isotopes in the sediments of Walden Pond record the global peak of thermonuclear bomb testing in the 1960s, a signature that some researchers consider emblematic of the Anthropocene.

The analysis suggests that the ecological condition of the lake has stabilized since the mid-20th Century. This means that recent efforts to lessen human impact on Walden Pond – improvement of septic facilities, work to stabilize erosion, the closure of a nearby dump that had attracted large numbers of gulls that pooped in the lake – are working; at least eutrophication isn’t getting any worse.

However, climate change in the coming decades could lead to further reductions in water quality, the researchers warn. In addition, “the cores also indicate that the phytoplankton community and dissolved oxygen conditions have not returned to their pre-impact condition,” they write. “Like many other lakes around the world, Walden Pond has instead moved to a new ecological state that is unique in the last 1,800 years if not the entire post-glacial history of the lake.”