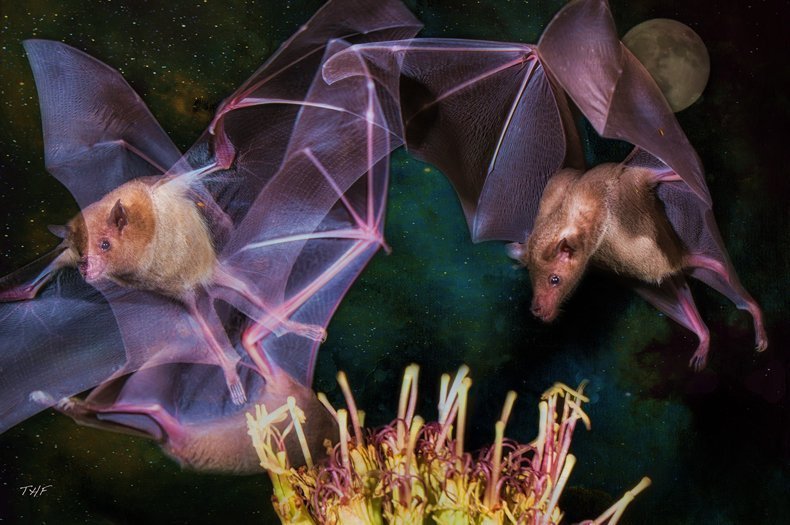 Bees aren’t the only pollinators with problems

Think of a pollinator and you’ll almost certainly think of a bee. It’s quite unlikely that you’ll think of a bird, much less a bat or a lizard — yet they too transport pollen and are experiencing declines both troubling and overlooked.
By Brandon Keim
April 18, 2018

Think of a pollinator and you’ll almost certainly think of a bee. Maybe a butterfly, but probably not: bees are bona-fide pollination celebrities, their importance recognized and predicaments lamented. It’s quite unlikely that you’ll think of a bird, much less a bat or a lizard — yet they too transport pollen and help landscapes bloom, and are experiencing declines both troubling and overlooked.

“While much scholarly and media attention has been focused on insect pollinators,” write researchers led by ecologist Fabrizia Ratto of the University of Southampton, “the role of vertebrate pollinators is not as widely recognized.”

Ratto and colleagues, whose new study is published in the journal Frontiers in Ecology and the Environment, hope to change that. They describe the extent of vertebrate pollination — it’s performed by no fewer than 960 bird species, along with dozens of mammals and reptiles — and analyze 126 experiments in which plants were enclosed in screens that only allowed insects through. Without vertebrates to pollinate them, those plants produced a whopping 63 percent fewer seeds or fruits.

To be clear, not all plants are like this. Most plants do rely on insects; birds pollinate about 5 percent of the average landscape’s flora, with that number doubling on islands, while bats are known to pollinate 528 plant species worldwide, and other vertebrates visit a few hundred more. It’s on this vertebrate-visited subset that the experiments reviewed by Ratto’s team focused.

Even a small fraction of global floral diversity adds up to a great many plants, though. They include important agricultural crops, such as durian and dragon fruit and agave, and wild plants whose diminishment would undoubtedly have far-reaching ripple affects. And diminishment is imminent: every year, an average of 2.5 bird and mammal pollinators move one official threat category closer to extinction.

Even though most of those species likely won’t go extinct, the extirpations and range contractions involved “still entail a great loss of pollinator diversity,” says study co-author Lynn Dicks, an ecologist at the University of East Anglia. That “would result in a decrease in fruit and seed production and cascading repercussions on plant regeneration and on the survival of animals such as frugivores and granivores.”

Project contemporary trends a few hundred years into the future, then, and the world is a much less less fruitful and animal-full place. What’s more, says Dicks, the losses will be just gradual enough that most people won’t notice. If we don’t do something about these pollinator declines now, our descendants might not even realize what they’ve lost.