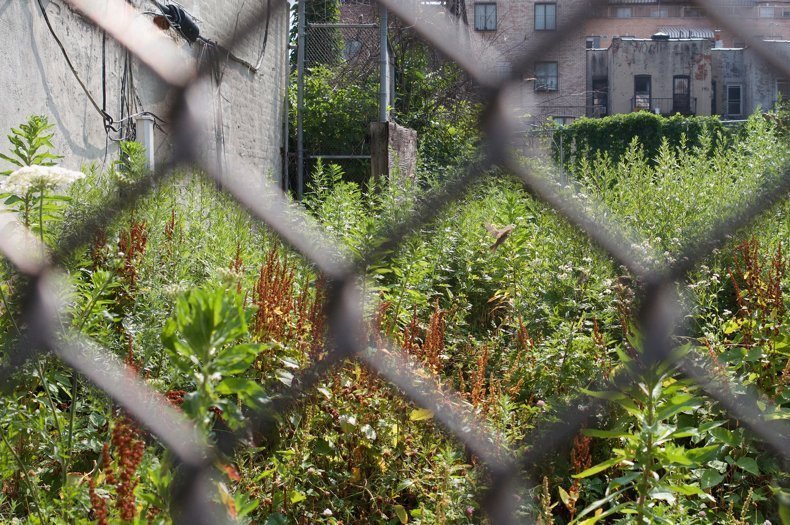 Vacant lots are full of nature. How do we keep them that way?

Vacant lots are vital islands of nature in the urban jungle. They’re also considered an eyesore and a problem. How, then, to cultivate that natural richness while also meeting the neighbors’ wishes?
By Brandon Keim
June 6, 2018

Vacant lots are islands of wildness in the urban jungle: small and scraggly yet bountiful and biodiverse, a place to enjoy nearby nature and a home to city creatures. Yet there’s a tension inherent to them. Unless people protect vacant lots, they’ll eventually be developed — and they are “often considered a neighborhood eyesore, a place for crime and trash,” write researchers in the journal Sustainability. “Vacant lots are usually deemed a local problem for neighborhood residents.”

How, then, to cultivate natural richness while also satisfying the needs and wishes of people living nearby?

Led by urban ecologist Christine Rega-Brodsky of Pittsburg State University, the researchers surveyed 150 lots in Baltimore, Maryland, quantifying their vegetation and bird life and physical features. Then they distributed questionnaires to local community groups, asking what features they preferred and what they wanted for their lots.

Common themes emerged. People liked trees, whether on old abandoned properties that had turned into forest or lots that were adopted by neighbors and tended as communal green spaces. Less popular were the banks of shrubs and early-succession vegetation characteristic of newly abandoned property, though people still tended to view these spaces favorably. Especially important were “cues of care” — signs of human presence and attention, even something as simple as a tidy footpath through a pop-up woodland.

“The words that respondents used to describe their least preferred lot selection primarily described the lack of care to the site, lack of safety, neglect, and an area for dumping trash and illegal activities,” write Rega-Brodsky’s team. For their own local lots, residents wanted them to “be either used as a park with benches, trails, and flowers, or a community garden.” Only a few people wanted vacancies filled by new buildings. Even fewer wanted them paved over.

In these responses can be seen a vision for vacant lot management: mixes of existing and newly-planted vegetation, especially trees and shrubs, with paths and community areas. For large lots — in Baltimore, entire abandoned blocks are common — residents will likely need some help getting started, but small lots can be easily maintained by a few people. To maximize biodiversity, it’ll be important to protect different types of lots: those rare spots that were never developed, lots reclaimed by nature decades ago, and also newly-vacant land.

With some litter removal and flower planting, write the researchers, “many vacant lots have the potential to be positively viewed by residents and provide opportunities” to connect with nature. The key is to strike a balance between natural features and recreational use, wildness and human influence.

If that can be done, there’s great conservation potential. In Baltimore, nearly 7 percent of the city’s land is vacant. Similar figures hold for other cities struck by economic hardshipe and demographic changes. “The transformation of vacant lots into useable spaces or forested parkland could be viewed as a long-term conservation management decision,” say Rega-Brodsky and colleagues. Today’s eyesore may be tomorrow’s natural treasure.