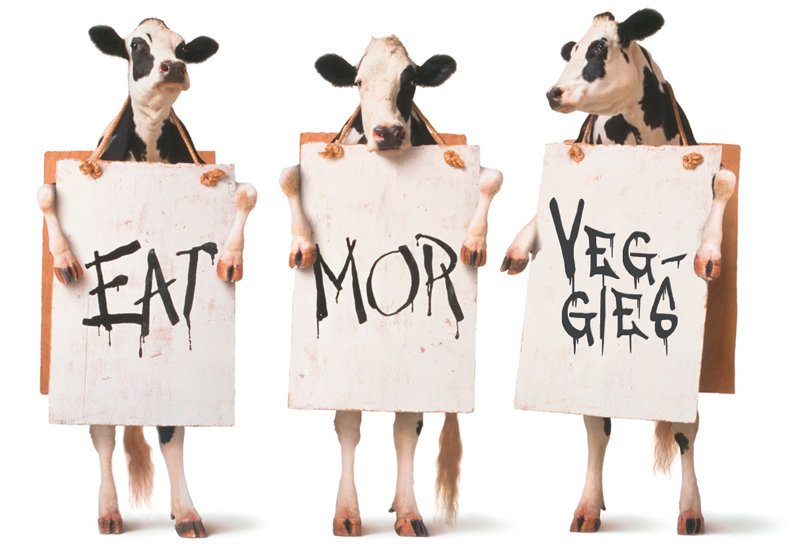 Livestock guzzle up a huge chunk of our global crop production. In a new study, researchers consider how much more food we would have on our planet if we saved those crops--by eating less dairy and meat.
By Emma Bryce
July 27, 2018

By 2050 we’ll have had to dramatically ramp up global food production to feed our planet. Or will we? A new study published in Elementa: Science of the Anthropocene turns that idea on its head, finding that actually, we already grow enough food to feed the 9.7 billion people that will be on the planet 30 years from now.

But there’s one catch: To do it we’ll have to reign in our appetite for dairy and meat, to reduce the diversion of valuable food crops into feed for millions of cows, sheep, and pigs.

The planet’s ubiquitous livestock are major competitors for the food crops we grow, such as soy and corn. As well as livestock, biofuel takes up a large proportion of our crops, and we also surrender a chunk of it to food waste and post-harvest losses. Taking these factors into account, the Lancaster University researchers wanted to map out how our current production matches what we’ll need in 2050. They found that the planet already produces enough crops to far exceed the average daily nutrient intake of earth’s current population: Technically, crops could provide enough to feed each human on the planet 5,935 kilocalories per person, per day (kcal/p/d): Humans technically need only 2,353 kcal/p/d.

But, of that quantity amount, 1,738 kcal/p/d is diverted to feed farm animals. Overall, livestock consume an estimated 34% of global crop production. On top of that, 1,329 kcal/p/d disappear through waste and loss, and almost 1,000 kcal/p/d is repurposed for other uses, like biofuel, cosmetic and pharmaceutical products.

These figures conjure a less optimistic vision of our global food system. They suggest that if we continue on this track of diverting edible crops to uses other than human nutrition, by 2050 we’ll actually have to increase crop production by almost 120% to provide enough nutrients for all the people on earth.

Interestingly, the researchers’ analyses also illuminated the fact that global fruit and vegetable consumption is 38% below the healthy minimum–compared to global meat and dairy consumption which globally sits at 20% above the health recommendation.

These facts point to some clear areas for change–mainly, reducing meat and dairy intake, which would improve global health and simultaneously preserve more nutrients for humans across the planet. For instance, this could free up vast quantities of maize (aka corn) for human consumption, a nutritious food that is often farmed solely for livestock. But, if we choose instead to continue on our dietary trajectory, we’ll be forced to transform more wild land into cropland at great expense to the environment, the researchers warn. Conversion of land into crops would mean further destruction of biodiversity, applying more fertilizer to the land, and elevating greenhouse gas emissions–which all run completely counter to the goals of sustainability.

The researchers drew from global data on food products, combining it with information on the foods’ nutritional profiles and the nutritional needs of grazing animals and humans. This produced a detailed picture of global nutrient flows, helping to reveal where nutrients go and how this scenario could be changed up, to feed more people.

The bottom line, they say, is that we do have enough food to feed the world. But we need to find much smarter ways of apportioning it. “Our analysis finds no nutritional case for feeding human-edible crops to animals,” they emphasise.