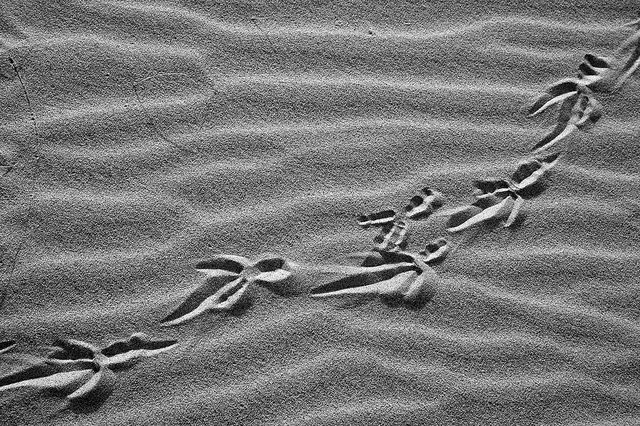 Climate change is emptying the desert of birds

For birds living in the Mojave Desert of southern California and Nevada, climate change has already been here for decades, and has cut bird diversity at many local spots by nearly half.
By Sarah DeWeerdt
August 14, 2018

Wildfires north of the Arctic Circle, a “fire tornado” in California, and heat records busted across wide swaths of the globe: the extremes of 2018 have given rise to headlines proclaiming that climate change has arrived. But for birds living in the Mojave Desert of southern California and Nevada, climate change has already been here for decades, and has cut bird diversity at many local spots by nearly half.

The findings come from a study published last week in the Proceedings of the National Academy of Sciences. In the study, University of California at Berkeley graduate student Kelly Iknayan surveyed birds present at 61 sites across the Mojave between 2013 and 2016.

To gauge bird diversity, Iknayan walked a transect at each site for three days in a row. She stopped at 10 places along the path and recorded all the birds she saw or heard over the course of 7 minutes.

Iknayan was following in the footsteps – literally – of Joseph Grinnell, the founding director of UC Berkeley’s Museum of Vertebrate Zoology. Beginning in 1908, Grinnell led an effort to map bird and other vertebrate diversity in habitats throughout California. The new study is part of a larger project to resurvey the same sites Grinnell and his team studied nearly a century ago.

Iknayan compared her observations with field notes made by Grinnell and his team, primarily between 1917 and 1947. She used statistical models to analyze how the bird community at each site changed over time.

On average, bird species richness at each site decreased by 42%. Of the 135 bird species included in the analysis, about 30% are less common and widespread today than they were a century ago.

The results “suggest a community in the process of collapse,” write Iknayan and Steven Beissinger, the paper’s senior author and a UC Berkeley professor of environmental science, policy, and management.

Iknayan then analyzed how climatic change, recent weather conditions, and habitat change affected the probability that species previously recorded at a site would persist. She found that trouble for the Mojave Desert’s birds has been driven primarily by climate change, especially a long-term decline in precipitation.

The Mojave is projected to get even warmer and drier over the next century, which could further accelerate the decline of the bird community.

Hardly any species colonized new sites between the first survey and the second. “Studies elsewhere have found that climate change typically makes places unfavorable for some birds but opens the door for others to come in,” Iknayan said in a press release. “In the desert we are not seeing increases in any of our species except for the common raven. There are a lack of climate change winners in the system.”

The Mojave Desert has seen very little development over the past century. Therefore, it offers an opportunity to assess the impacts of climate change alone, without the confounding effects of habitat loss that are widespread elsewhere. But the study illustrates that protected land can’t necessarily protect species from climate change. The most severe bird declines were seen in Death Valley National Park, which is the largest National Park in the continental United States and 90% designated Wilderness.

Desert environments may be more likely to show the effects of climate change than other habitats. Desert birds live near their physiological limits, and deserts have gotten warmer and drier faster than other regions in recent decades.

But changes would also be hard to identify in other areas, because most biodiversity surveys only go back to the 1960s or 1970s. Iknayan wouldn’t have been able to recognize the collapse of the Mojave bird community if it hadn’t been for Grinnell’s work. And as it happens, Grinnell’s original project was inspired in part by the sense that land-use change and the arrival of invasive species were already reshaping California’s environments a century ago.

Source: Iknayan K.J. and S.R. Beissinger “Collapse of a desert bird community over the past century driven by climate change.” Proceedings of the National Academy of Sciences. 2018.