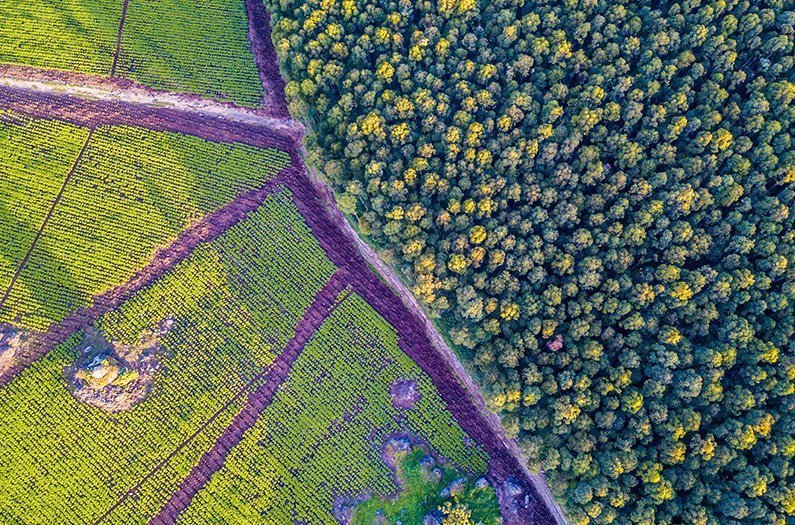 With half the planet saved for nature, will we have enough to eat?

The idea of devoting half of Earth’s terrestrial surface to rich, intact forms of nature is an inspiring vision. Yet, what would it mean for food production, which currently represents the single largest human land use?
By Brandon Keim
August 15, 2018

The idea of devoting half of Earth’s terrestrial surface to rich, intact forms of nature has stirred conservationist imaginations in the last few years. It’s an inspiring vision, simple yet powerful, a bright aspiration amidst the gloom of extinctions and extirpations.

Between the idea and the reality, though, is plenty of practical uncertainty. What would setting aside half the planet’s land actually entail? Who would make the decisions? And, crucially, what would this mean for food production, which currently represents the single largest human land use?

“Possibly the greatest trade-off embedded in the Half-Earth proposal is with agriculture,” write researchers led by Zia Mehrabi, an agricultural sustainability specialist at the University of British Columbia, in a study published in Nature Sustainability. “The food production costs of Half-Earth are yet to be assessed.”

Co-authored with Navin Ramankutty, an agricultural geographer at UBC, and Erle Ellis, an environmental scientist at the University of Maryland, Baltimore County, the new study offers “an initial assessment of the potential global trade-offs” between agriculture and this ambitious conservation goal. It’s far from the final word, but it’s a good place to start.

After combining datasets on global land use, protected areas, biodiversity, and crop production, the researchers simulated possible agricultural losses involved in various conservation strategies: setting aside half of each ecologically distinct region, or half of every country, or half of Earth in aggregate. (In the latter condition, protected areas might be concentrated in certain places, such that more than half of Brazil but less than half of China is protected from human harms.) Each approach was then modeled according to whether natural areas existed in large, contiguous nature-only blocks or mosaics of protection and human use.

While the results are best suited to a spreadsheet rather than paragraph form, a few key numbers capture the gist. Using an Earth-in-aggregate strategy, the simulations suggested that 10% of all non-food calories — livestock feed, biofuels, and so on — and 11% of crop food calories would be lost were natural areas kept large and contiguous. In a mosaic setting, those losses dropped to zero.

Were half of each ecoregion protected, however, the losses swelled to 25% of non-food calories and 29% of food calories in contiguous-nature scenarios. In mosaics, losses hit 23% and 3% — smaller but still significant, given the imminent needs of several billion more humans by century’s end. “We find no clear pathway to give half our planet to nature at a scale that maintains ecosystem connectivity and still feeds the world,” write Mehrabi’s team, “without at least some nations or sub-populations losing out.”

Asked for comment, Carly Vynne, a conservation planner with the Nature Needs Half network, applauded the researchers for confronting the possible tradeoffs. “It’s probably the key issue to address,” says Vynne. The analysis itself, though, she considers “based on a straw man argument that somehow there would be a global land grab for conservation.”

Agriculturally rich areas would not be taken out of production, Vynne says, and conservationists already recognize the value of mosaics and the necessity of setting different goals for different regions. “For some countries, like Madagascar, reaching 10% in the right places would be a huge win,” she says. “In other areas, such as the Amazon, we might need 85% contiguous forest cover to maintain ecosystem functions, but there would be little conflict with row agriculture.”

Vynne also stressed the positive relationships between biodiversity and food production. Failing to protect and restore half of Earth’s terrestrial nature will likely lead to “much greater food insecurity, displacement of farming and farming communities, and loss of ecological services that are key to ensuring food production,” Vynne says. “These threats are more likely to challenge future food production than any conservation deal.”

Further debate is certain to follow. Erle Ellis calls the study a “first pass,” a way of jump-starting a necessary dialogue. And as he and his co-authors note, there’s also much to be gained from curtailing food waste, which presently claims about 24% of all calories, and shifting consumption from crop-intensive livestock to more-efficient plant-rich diets. That would allow a great amount of nature to be protected with little cost to people.

These are vital conversations to have now. After all, it was just a few decades ago that 150 nations signed the Convention on Biological Diversity, a legally-binding pledge to halt biodiversity loss by 2010. That, obviously, didn’t happen. Nor does it appear that the global Strategic Plan for Biodiversity will meet its 2020 deadline — and setting aside half of Earth is more ambitious still. Success — or failure — will reside  in the details.

“The ecological, political, sociocultural, economic and business models needed to sustain a global conservation project of such scale and ambition over decades and into the deep future,” write Mehrabi’s team, “have yet to be developed.”

Source: Mehrabi et al. “The challenge of feeding the world while conserving half the planet.” Nature Sustainability, 2018.