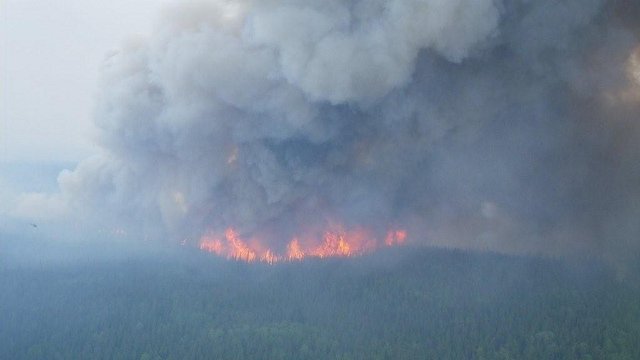 In a century or two, the vegetation of this planet may look completely different than it does today

Climate warming at the end of the last Ice Age triggered sweeping changes in to the planet's ecosystems that could fortell the future if carbon emissions remain unchecked.
By Sarah DeWeerdt
September 4, 2018

At the end of the last Ice Age, average temperatures increased by 4 to 7 °C across different parts of the globe. That’s roughly the temperature change that is expected over the next 100 to 150 years if greenhouse gas emissions continue their current trajectory.

Similarly dramatic changes are likely if we don’t rapidly curtail carbon emissions, researchers suggest in a study published August 31 in Science. The international team of 42 scientists combed through pollen and plant fossil records from 594 sites on all continents except Antarctica [1].

They compared what grew between 21,000 and 14,000 years ago, during the last glacial period, with modern vegetation at each site. Then they looked at temperature changes at each site to gauge how the magnitude of warming is related to the magnitude of ecological change.

“We used the results from the past to look at the risk of future ecosystem change,” University of Arizona geosciences graduate student Connor Nolan, who conducted much of the analysis, said in a press release. “We find that as temperatures rise, there are bigger and bigger risks for more ecosystem change.” The changes affect both the mix of species present and the overall structure of the ecosystem – for example, forest versus grassland.

Previous studies have used computer modeling and present-day observations to predict the effects of warming on the biosphere. This is the first to use paleoecological data to look at how vegetation changes went along with warming in the past, and it suggests that the effects of warming on ecosystems in the future will be more severe than other studies have predicted.

“If we allow climate change to go unchecked, the vegetation of this planet is going to look completely different than it does today, and that means a huge risk to the diversity of the planet,” study coauthor Jonathan Overpeck, dean of the School for Environment and Sustainability at the University of Michigan, said in the release.

Vegetation changes could be even more extreme than they were during the post-glacial period because the warming is happening so much more rapidly, according to corresponding author Stephen T. Jackson, director of the U.S. Geological Survey’s Southwest Climate Adaptation Center. “We’re talking about the same amount of change in 10-to-20 thousand years that’s going to be crammed into a century or two,” he said. Moreover, land use change and invasive species will magnify the effects of warming.

Their analysis suggests that with continued high greenhouse gas emissions, the probability of major vegetation change is more than 60% across most of the globe. If we cut greenhouse gas emissions to the levels specified in the Paris Agreement, the risk of big changes to the species present falls below 45% for most areas, and the risk of large structural changes to ecosystems below 30%.

But some of these big ecosystem changes are already going on, as species undergo geographic range shifts or replacement by other species after fires or drought-related die-backs. In an unrelated study published August 30 in Scientific Reports, Australian and U.S. researchers documented how extreme weather events can reverberate throughout regional ecosystems [2].

The researchers conducted a meta-analysis of studies tracking the effects of a 2011 heat wave in Western Australia. They found that during the heat wave and in the season or two afterwards, dramatic disruptions occurred in both terrestrial and marine ecosystems across an area spanning over 300,000 square kilometers.

At sea, the heat wave triggered coral bleaching and loss of 36% of an important seagrass bed. On land, tree and shrub mortality of 19% led to outbreaks of wood-boring insects. The population of the endangered Carnaby’s Black Cockatoo fell by 60% and has not yet recovered; Little Penguin colonies had a disastrous breeding season.

But by telling only a small part of the story, looking at individual species or locations, past studies have undersold the effects of heat waves, the researchers say. The bigger picture, it seems, is that this is the way the biosphere as we know it ends: not with a bang nor a whimper but knocked back and back, one climate disaster at a time.

Image: A forest fire near the British Columbia-Yukon border. Credit: B.C. Ministry of Transport via Flickr.